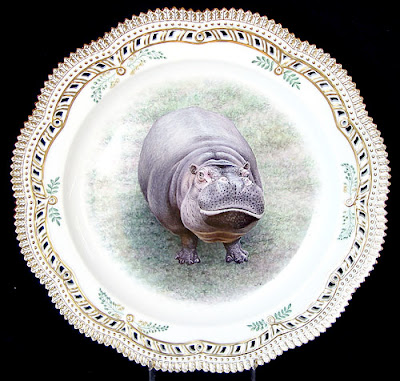 (This post was originally on jalopyjunktown.com but, having broken Junktown beyond repair, I brought it over here.)

All quotes from the Wall Street Journal (subscription required):

When collector Richard Baron Cohen decided three years ago to commission a historic set of porcelain dinnerware, he sought out a storied producer, Denmark's Royal Copenhagen Porcelain. He selected its most prestigious pattern, a 1790 design created for Catherine the Great. Finally, he enlisted the factory's semiretired master painter to give each one of the 144 pieces its crowning touch -- hippopotami.

Yesterday, Sotheby's in New York mounted an exhibit of Royal Copenhagen's Hippopotamus Service, calling it "the single most important commissioned service of the last 100 years." From soup tureens to sugar bowls, the Flora Danica dinnerware, which would traditionally depict Danish botanicals, instead shows 303 hand-painted, photorealistic hippos yawning, eating grass and bobbing just above the water line. Some of the gilded platters feature up to eight different hippopotomi in natural settings such as muddy African riverbanks. Other dishes are more fanciful, such as the plate with a pair of hippos cuddling cheek to cheek in a moonlit meadow; ornate lettering on the back gives their names (Petal and Perky) and current home (Toronto Zoo).

We celebrate the hammer as if it had assembled a nation. It did, and it is worth celebrating. However, I was not prepared for The Hippopotamus Service as it changed the way that I view the world. On the best days, you see something that you are absolutely positive you will remember for the rest of your life.

I believe in objects - worn, proletariat, celebrated, tiny, grand, sitting on dusty shelves in suburban garages, rusty, forgotten, reviled, behind glass in museums, praised, mechanical, pristine, decorative, functional, authentic, playful, historic, perfect, personal and profound. Sometimes, when I am being difficult, I ask people, "When was the last time you bought an heirloom?"

Of course, heirlooms are handed down. But how does something transcend being an object to become an heirloom? Aesthetics help, but it is really the sparks the object catches off its owner. To be an heirloom means to be cherished, which is expressed during hushed showings among closest friends. Heirlooms have such personal value and deep meaning to an individual that, with respectful continuity, the soul of the object is transferred to future caretakers. Not a soul like a dog or a grandma, but a soul that is defined by the place the object occupies in a person's heart. Some objects - like New York's Central Park, the Porsche 917 or the family Christmas tree as it appeared in 1977 - are so grand that they are collectively held in the hearts of many people.

Garage sales are the final stop before the trash can for heirlooms that have fallen from favor due to economics, space constraints or lack of attention. From the time the current owner stopped caring until the moment that I purchase, the soul of the object has been disrupted. Luckily, it is easily resuscitated. Meaningful objects are easy to love.

In 2003, he met a ceramics scholar for lunch and they wound up talking about Royal Copenhagen's 1880s dinner patterns, and how they often featured bears, ducks or birds. Mr. Cohen said, "You know, I think I'd like to see a hippo on one of those."

He scrounged for antique etchings of hippos but eventually decided to go all out and hire photographer Sarah Galbraith to document the names and faces of nearly every hippo in captivity -- she ultimately traveled to 101 zoos in 33 countries, including Vietnam, South Africa, Australia and Sri Lanka. (She has chronicled her trips in a blog, "Joined at the Hippo: The story of traveling the world, one hippo at a time.")

Back home in Oyster Bay, N.Y., Mr. Cohen sifted through 3,000 images and sent his favorites to Royal Copenhagen, which hadn't received a commission of this scale in at least a century. He asked for the hippos to be painted on the company's renowned Flora Danica pattern -- also found in the collection of Denmark's Queen Margrethe II -- with enough teacups and dinner plates to serve a five-course meal for 18. The 231-year-old porcelain company has about 25 artisans who can paint the pattern for regular, five-person place settings (cost: about $6,000). But because of the scale of this commission, the company called in semi-retired master JÃ¸rgen Nielsen to do the entire set. (Mr. Cohen says he doesn't plan to sell the collection, or eat off it.)

Naturally, an effort like this must suffer questions of whether $400,000 was worth it and the inevitable comparison to real estate soon follows. Of course it was fucking worth it. $400,000 is a rounding error when purchasing an Impressionist painting, an act that adds no value to the world but merely transfers bragging rights. It wasn't $400k charged by a private equity fund for management costs incurred while splitting up a venerable family company, it was spent hiring a photographer, painters and one of the five remaining porcelain companies that can still execute such a noble effort. There are valid discussions about distribution of wealth, but this is not one of them.

Mr. Cohen's hippo attachment dates to his childhood, when as a first-grader in Manhattan he treasured "Veronica," Roger Duvoisin's 1961 book about a restless hippo who goes to the big city.

May we all have something in our lives that is so profoundly meaningful we would choose to commemorate it on a 144 piece set of porcelain dinnerware. I am not certain that I will ever be flush enough to fund a project of such scope. Perhaps I will find the means one day to commission a $6000 five-person place setting of something worthy of such an honor. It seems I will need to scale back my consideration of custom van themes. Babar? My grandfather's Curta calculator? My first car, a 1968 Chevy Nova painted with a spray can? The man-eating giant carp that I caught in a certain muddy creek in 1977? Until then, I will settle for The Hippopotamus Service being part of me.