Then and Now #1: Lucky Charms cereal 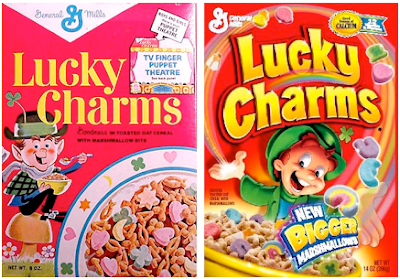 THEN: The original Lucky Charms leprechaun wears a happy expression, but beneath the smile and bright blue eyes, there's a hint of mischievousness bordering on malevolence. Sitting atop a toadstool surrounding by fanciful flowers, his expression seems to say: "If you interrupt my meal, I will use my magic to fuck you over in ways you would not wish on your worst enemies."

Note the typeface used for the cereal's logo. It's ordinariness is enhanced with a fey touch, making it perfect for conveying the magic properties of a cereal based on Irish mythology. The decorative cereal bowl is adorned with images of the charms, and the cereal itself is illustrated in a pleasingly realistic style rather than being photographed. With the addition of a burst for the TV Finger Puppet Theatre premium, the overall effect of the design is tremendously appealing for children as well as adults.

NOW: To hammer home the idea that Lucky is lucky, the clover in his hat has four leaves, instead of three. Gone is his look of barely-restrained maliciousness; it's been replaced by a look of empty joy that might be seen on the face of a rhesus monkey with an electrode drilled into the pleasure center of its brain. His outfit has been updated into something Jim Belushi would wear while hosting the St. Patrick's day parade, and his teeth have a gopher-like overbite.

The delightfully eldritch logo lost its serifs, and accrued three dimensions, warping, a gradient, an outline, a drop shadow, and a rainbow-colored flourish. The burst advertises BIGGER marshmallows, because today's kids are hungrier than they were in the 1960s. With the rainbow-colored swirl and scattered charms, the overall effect is nauseous and confusing.