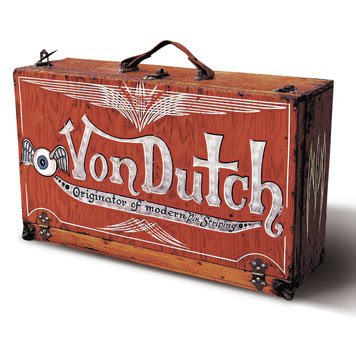 (This post was originally on jalopyjunktown.com but, having broken Junktown beyond repair, I brought it over here.)

Luckily, the ghost of Von Dutch already suffered the gross indignity of his name being licensed to sell overpriced trucker hats. An injustice that great assures that Von Dutch will be not coming back from the dead to rattle around Beverly Hills mansions looking to reclaim his hammers or pick-up truck tailgate.

"Everything you love, everything meaningful with depth and history, all passionate authentic experiences, will be appropriated, mishandled, watered down, cheapened, repackaged, marketed and sold to the people you hate." Hooptyrides

$65 Von Dutch trucker hats sold at Bloomingdales are an abomination. Von Dutch's pinstriping box selling for $270,000 makes a sort of sick sense. Sure, it is insulting at some level that anything less than a 3 bedroom house should sell for that much money, but this box is key in the history of hot rodding. Not the dry lakes and khakis hot rodding of the 40's, but the acid and Coors drenched metalflake 60's.

To the horror of the Smithsonian, I will paraphrase what they do, what they preserve and what story they tell. A social history of the United States as told through remarkable and unremarkable objects which convey the unique experience of being American. Rather than just being Edward R Murrow's lunch pail or Picasso's beret, this paint box is so much more interesting as it is remarkable and unremarkable. It is a beautifully executed piece of artwork and still serves the proletariat duty of being a toolbox. The pinstriping box tells much more than Navarro's toolbox. It tells a bigger story. 2700 times bigger? Maybe.

Money is ambivalent and agnostic. Luckily for me, money does not care about tact, class or intent, otherwise I would have none. Hopefully, the pinstripe toolbox was purchased by the Smithsonian or the Peterson, but I wouldn't blame a rich bastard for buying it and keeping it locked in a closet since the only thing separating me and that rich bastard is the rich.

It was exhilarating to see.