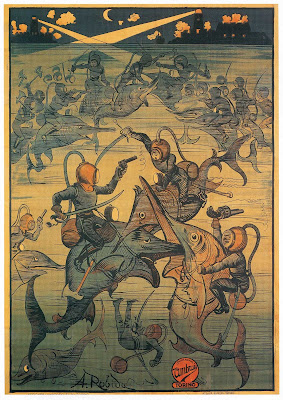 Do yourself a favor and click above image for bigness
It appears that neither fiend nor fish is safe in the 1914 film L'Avventure Straordinarissime di Saturnino Farandola. In addition to creating the most beautiful movie poster I have ever seen, Albert Robida has written/illustrated over 200 books and completed 60,000 drawings.

In addition to being a prolific illustrator, Robida was a futurist and science fiction writer who pictured a future where books would be replaced with recordings listened to on pocket watch sized phonographs powered by the movement of the human body.

But what of the future of books? The narrator argues that Gutenberg's invention will soon disappear. Reading causes lassitude and wearies us tremendously. Words through the speaking tube, however, give us a special vibrancy. The gramophone will destroy printed works. Our eyes are easily damaged, but our ears are strong.

But, his listeners object, gramophones are heavy and the cylinders easily damaged. This will be taken care of; new models will be built which will fit in the pocket; the precision of watchmaking will be applied to them. Devices will collect electricity from the movements of the individual, which will power the gramophones.

The author will become his own editor. In order to avoid imitations and counterfeits, he will deposit his voice at the Patent Office. Instead of famous men of letters, we will have famous narrators. The art of diction will become extremely important. The ladies will no longer say that they like an author's style, but that his voice is so charming, so serious, that he leaves you full of emotion after listening to his work: it is an incomparable ravishment of the ear.

The libraries will be become phonographoteques. They will house famous works by artists in vogue, such as Coquelin's performance of Moliere, Irving's Shakespeare, Salvini's Dante, etc. Bibliophiles will become phonographophiles, and collect cylinders with the unique example of the voice of a Master of the theater, poetry or music, or those with new and unknown alternate versions of a famous work. Narrators will do comic pieces, sound effects, and dialects like Irishmen and American Westerners.

At the crossroads of all cities, there will be kiosks where the passerby can put in a penny and hear the works of Dickens, Dumas Sr. or Longfellow. The author can carry his works to buildings on the street, where multiple pipes will carry his words to all the windows for the people to listen. At four or five cents per hour, even the poor can afford this, and the wandering author will still make money because of the number of listeners at each house.

Our grandchildren will use phonographs everywhere; at every restaurant table, public transportation, steamship cabins, and hotel rooms; railroads will supply Pullman circulating libraries which will make travelers forget the distances they cover, while allowing them to look out the windows. Printing will be abandoned, except for a small possible use in trade and private communication.

He is right. All the kids are listening to iPods in their steamship cabins. 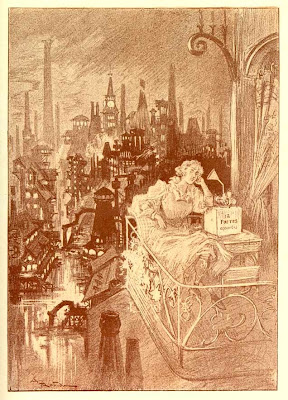