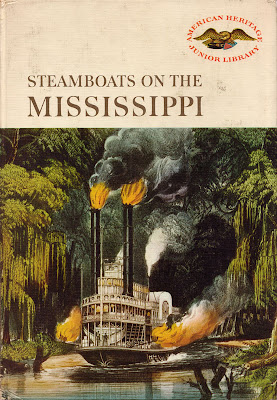 The American Heritage Junior Library book on steamboats reads like a damn novel.

From Steamboats on the Mississippi:

There were many notable races, but the most famous of all was the one between the Robert F. Lee and the Natchez in 1870... All the glass in the Lee's pilothouse was removed, as were the steam escape pipes, and various doors, windows, shutters, and projections - anything that would cause air resistance... A captain trying to set a new record or show his heels to another boat would cram the fireboxes with fuel, throw in pitch or oil or fat sides of pork to make the fire burn faster and hotter, tie down the safety valves to raise the steam pressure to a screaming pitch - and hope for the best.

One of my very favorite books, and this isn't sickeningly sweet nostalgia for a book I read in a tree house as a kid - I read it the first time a couple of years ago! There is a chapter called "Scoundrels and Cutthroats!" A champion of a book. I wish history was always told so effortlessly.


American Heritage Junior Library "Steamboats on the Mississippi"
Out of Print
Link
Posted by Mister Jalopy at 8:54 AM
Email ThisBlogThis!Share to TwitterShare to FacebookShare to Pinterest
Newer Post Older Post Home