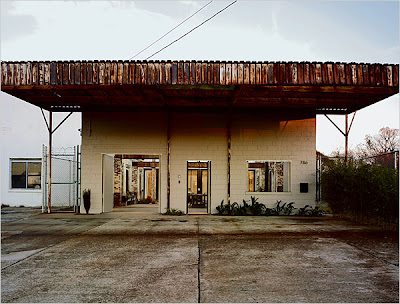 Out near East 90th and G in Lancaster, California, there is a gutted concrete block homesteader cabin that has lost its roof, doors and windows to the tyranny of time with the fireplace being the sole interior feature. With the roof gone, sitting in the interior of the one time house feels like you are relaxing in courtyard garden surrounded by a hacienda. One day, I will buy the most outrageous 1960's Baroque-inspired, Sears-purchased, gold velvet and carved wood furniture that a $300 budget will allow and move into that concrete fort for a weekend.

David Yocum and Brian Bell had the same idea when they built a sleek architecture office inside a rusting hulk of an auto repair shop. Rather than tear down the collapsing building, they converted it into an atrium that separates their offices from the nutty-nut-town world outside the walls. Brilliant reuse. Very smart. 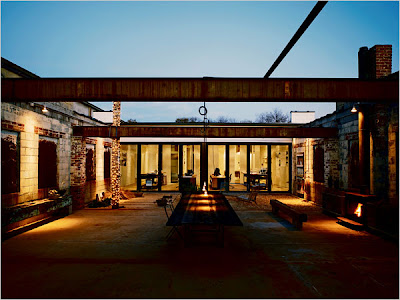