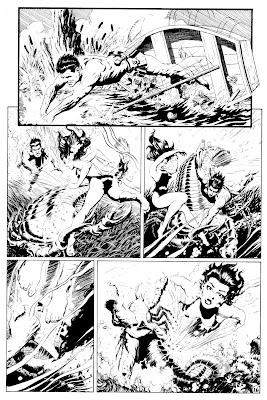 As a fan of the old EC comic books, especially Weird Science and Weird Fantasy, I immediately fell in love with Mark Schultz's work when I came across it in a 1986 issue of Death Rattle. His drawing style pays homage to EC greats like Al Williamson, Frank Frazetta, and, most notably, Wally Wood, without being slavish to any of them.

Schultz' first comic book, Xenozoic Tales (later renamed Cadillacs and Dinosaurs) takes place after a major geological catastrophe kills off billions of people, forcing the few survivors underground. When they emerge, prehistoric life has returned, and only those who are prepared to fight the ferocious beasts will survive in the new world. And who better to deal with nature, red in tooth and claw, than Jack Tenrec, a restorer of vintage Caddys, and his comely scientist companion, Hannah Dundee (who seems to have a knack for losing her clothes and having to wear tight-fitting animal skin outfits in their stead). As they travel the treacherous, neo-prehistoric landscape in a dinosaur-manure powered old Cadillac, the pair discover that all is not as it seems in the jungle covered world.

Two Xenozoic Tale anthologies were published, but they're out of print, Amazon sells used copies