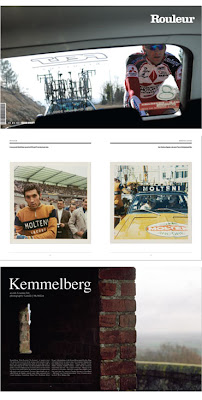 Although I rode a Gitane road bike as a kid in the 1970's, I must admit I am pretty new to bicycling. This will come as a surprise to some as I own a store that traffics in used bikes and currently have about 70 bicycles. My passions ignite quickly, deeply and honestly.

Nine months ago, I had only one bicycle and it was too small for me - a Raleigh Carleton that belonged to my mother in the 1970's. Now I have a perfect 1980's chrome GT BMX, a 1936 Schwinn Liberty with a locking fork, a late 1990's carbon fiber road bike, a Huffy covered in water slide decals from defunct baseball teams, a set of Phil Woods wheels and a drawer of vintage Campy waiting for a frame. Like my previous obsessions, this is not a collection acquired through careful planning and rigorous eBaying. Instead, I just put myself out there, open my eyes and the stuff finds me.

As a neophyte, I have just discovered Rouleur through a mention by Rich Roat on the House Industries' Show and Tell. I can't tell you much about Rouleur except that I just subscribed to a $125 a year magazine based on the beauty of a handlebar tape wrapping diagram.