Own a piece of Mars 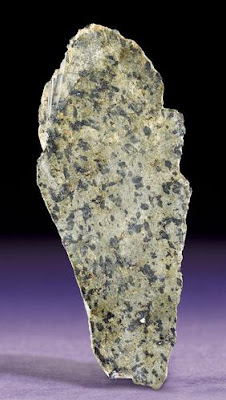 Atoms are just atoms, but the story about a particular conglomeration of atoms makes it desirable to people who enjoy the story. Case in point: this not-particularly pretty hunk of rock, which most people would walk by without a second glance if they happened to see it on the ground. It just so happens that this rock is a piece of the planet Mars. Opening bid on eBay is $2,500.

Shergottite, DAG 735 Sahara Desert, Libya -- There are only a handful of Mars meteorites in the world and based on the total weight, Mars rocks are thousand times rarer than the rarest of gemstones. The only possible explanation for their existence here on earth is a huge meteorite impact on the surface of Mars, so big that chunks of the Martian surface rock blasted out of the impact area, reached escape velocity and left the Martian orbit. After millions of years drifting in space, just a few of these space travelers were captured by the earth's gravitational field and plummeted to our planets surface as meteorites. A Shergottite is cooled volcanic magma called basalt, proving the existence of vulcanism on Mars in the planets past geological history. This great specimen measures 54 x 23 mm and weights 3.3 grams.