Phil's Diner in North Hollywood to be Re-Opened 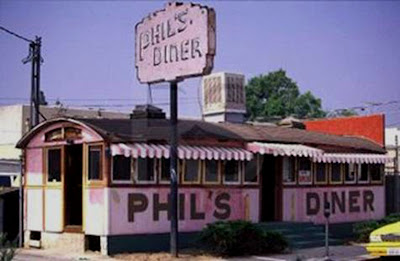 The Museum of the San Fernando Valley reports that Phil's Diner, which opened in the 1920s to feed people waiting for the train at the Lankershim station, will be restored to its period authentic former glory. That sounds nice, but why do I think it'll feel like a vastly overpriced Denny's Diner when it re-opens? Gimme the peeling paint, running-on-one-cylinder Phil's any day.

The North Hollywood (then called “Lankershim”) Southern Pacific train depot opened in 1892. For the first thirty or so years it served principally as a shipping point for the area’s rich farming products. By the early 1920’s North Hollywood had become a bustling well-to-do town. In 1923 nearby Toluca Lake was created as a first “bedroom community” for Los Angeles in the Valley. In that same year Lakeside Golf Club opened. By the 1920’s the Lankershim train depot served as many passenger trains as freight trains and the depot needed a restaurant for passengers to eat while they waited. To serve that need, Phil’s Diner was created.

Phil’s Diner was designed by Charles Amend, and like so many other famous diners of the day (including the famed Pacific Dining Car in downtown Los Angeles ) the building was essentially pre-fabricated and moveable on the back of a flatbed. A diner like Phil’s was often moved from the original location. The diners were even made to look and feel like a railroad “dining car”.

As the years passed by, the train depot finally closed and then North Hollywood transitioned from a thriving community to a blighted and forgotten industrial area, Phil’s fell on hard times. The original distinctive pink and black colors become faded and began to peel. Many of us – who just loved the history behind Phil’s – would still make the occasional visit and sit either at the wooden counter or at the single line of small tables. By the end you usually found yourself alongside a blue collar worker or a new immigrant, enjoying what was certain to be a one way ticket to heartburn; but it didn’t matter, because it was Phil’s.

Finally, Phil’s died. The last “blue plate” special was served and the doors were locked – it seemed likely – for all time. After several years of boarded doors and windows, the little building was raised on timbers and moved several blocks from the original site, where it now sits on a vacant lot behind a locked construction fence.