Ways of the Six-Footed: A Delightful Introduction to the World of Insects 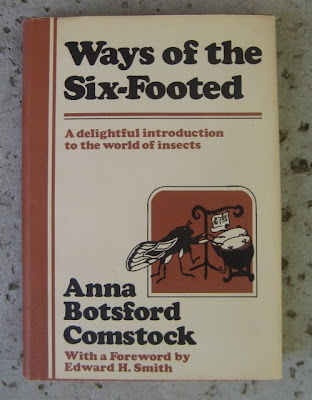 Ways of the Six-Footed: A Delightful Introduction to the World of Insects, by Anna Botsford Constock, is not a well-known book. A Google search turns up just 57 results, none of which mention the book other than in passing.

Anna Botsford Comstock [wikipedia] is more well-known. In 1923, twenty years after the publication of Ways of the Six-Footed, a League of Women Voters survey named her one of America's 12 greatest living women for her role as a nature educator. She said her teaching method, based on direct observation, was to "cultivate the child's imagination, love of the beautiful, and sense of companionship with life out-of-doors."

Here's an excerpt about queen bees from a chapter on social insects called "A Perfect Socialism":

In appearance she is larger than the largest workers -- evidently a queenlier bee. Her first act, if unhindered by the workers, is her one claim to similarity to human royalty: she starts at once on a hunt for other queens in the hive, for our queen is jealous and will brook the presence of no other claimant to her throne. Her sting is a nobel weapon kept sacred to the slaying of her peers. She hunts for other queen-cells, tears them open with great fury, and assassinates the helpless young princesses within them. But she is quite as ready for a fair fight as for assassination, for when she finds another queen fully developed she will fight her until one or the other is killed. The stark bodies of fifteen unfortunate queens we found one day thrown out of their hives; grim witnesses to the prowess of the royal lady in possession of the colony.

I first came upon "Ways of the Six-Footed" 11 years ago in the library of the Museum of Jurassic Technology and spent the better part of an hour reading it. I ordered a copy from Amazon as soon as I got home (it's out of print, but you can buy a used copy for as little as $2.14!).