"The Blockhead" - Edward and Nancy Kienholz 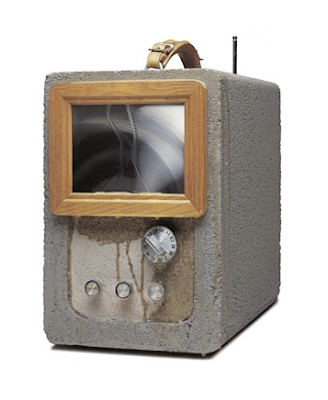 As an edition of 75, this Kienholz sculpture seems almost affordable at the auction estimate of $1500-2000. The description states that the construction includes a transistor radio and a "Fresnal lens system." Not that it would need to do something to justify the price, but I do wonder what is viewable through the front fresnal.

Kienholz is one of my favorite artists and a great inspiration. I learned from his work that the construction of sacred spaces is less about square footage and more about the quiet power of the meaningful objects therein. And, as a craphound, I have a natural affinity for his use of the decaying objects of civilization that are in such decline they are reverting to an organic state of the source materials; The nails rust and turn to ore, the wood rots until it is mulch. Manufactured detritus, if you will.

Rather than the flower power of peace and love, Ed Kienholz embodies the brash, anti-establishment 1960's when individuals reclaimed their individuality from the corporations and government.

From x-online.org's Good Morning, My Name is Ed Kienholz:

On a flight from Washington D.C. to Los Angeles in 1968, American artist Ed Kienholz (1927-1994) reluctantly checked-in an ornate, well packed Tiffany lamp and lampshade he and his wife, Lyn, had received as a gift. He had planned on carrying the items on board, but the airline insisted that it be checked-in. Kienholz was so concerned about the handling of the items that he had the airline insure the package before takeoff. Upon arrival to LAX, Kienholz discovered the lampshade shattered and irreparably damaged. He explained: “I went in [to baggage claim] and told them that I had this lampshade, how I had with great reluctance shipped it through, and that I wanted to open it there and be sure it was okay. Of course, I opened it, and it was busted.”

After having the lampshade appraised, Kienholz submitted a formal reimbursement claim with TWA, only to have the airline refuse payment and accuse him of fraudulently packing a broken item in the hopes of recovering a cash settlement. More disturbed at being called a liar than by the loss of the lamp, Kienholz threatened an airline customer service representative that if the matter was not resolved by the time he returned to LA from an exhibition out of town, he would enact equal damage to TWA as the airline had caused him. While waiting for the airline’s response, Kienholz consulted with an attorney (who encouraged the artist not to take justice into his own hands), then returned to LAX with a typewritten letter, a photographer, and an ax. 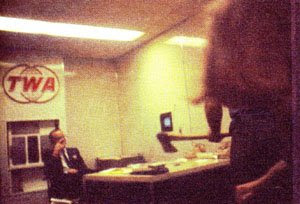 Kienholz’s letter bluntly stated: “Good morning, my name is Ed Kienholz...you broke my lampshade and I’m really unhappy...so I’m going to cause TWA an equal amount of damage. I’m going to destroy a desk for TWA.”

This is exactly what Kienholz proceeded to do; he destroyed the desk and, somehow, made it back to his car before being apprehended by the Los Angeles Police Department. Though cited and fined for disturbing the peace, Kienholz was eventually reimbursed, and vindicated, for the lampshade through a small claims court victory against the airline, and no further charges were filed or pursued. Throughout the incident, Kienholz not only documented his actions through photographs and writing, he also garnered and exploited a tremendous amount of local and national media attention. He summarized the incident as follows: “It takes a lot of 'Up, up and away’ ads to overcome the humorous, negative publicity TWA got out of that. They would have been a lot better off to not call me a liar.”