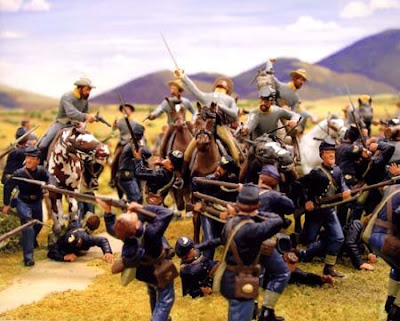 There's a rather bizarre little news item involving the Camp Mabry Museum here in Austin. The museum's Executive Director, Jeff Hunt, is accused of destroying a 5-foot-by-10-foot diorama of the Battle of Palmetto Ranch, apparently unhappy with historical inaccuracies it portrayed. Hunt maintains it was carefully disassembled, but museum employees say they witnessed him having an emotional 'tantrum' over the diorama, and that he spent an after-hours weekend last October irreparably destroying the display. The diorama had been constructed for the museum by the students of Glen Frakes, a history teacher in Gilbert, Arizona.

Glen Frakes...says his students spent more than three years and thousands of hours building the diorama for the Camp Mabry museum, and Hunt tore the diorama apart, soldier by inches-tall soldier, over the course of a weekend last fall...Over the years, Frakes and his students have had dioramas placed all over the country, including in the Smithsonian Museum in Washington, D.C.

The story takes an even more bizarre turn when it's revealed that Hunt authored a book about the Battle of Palmetto, which served as a reference by Frakes and his students for accuracy when building the diorama.

Link (via The Austin Chronicle, above photo by Glen Frakes)
Posted by Jenny Hart at 6:02 AM
Email ThisBlogThis!Share to TwitterShare to FacebookShare to Pinterest
Newer Post Older Post Home