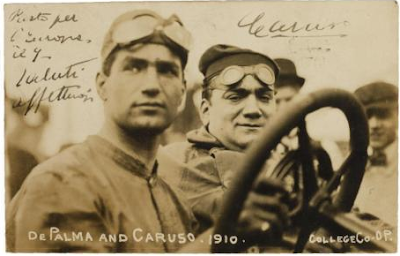 ...twenty-five portraits of Caruso, his sons Rodolfo ("Fofo") and Enrico ("Mimmi"), about half signed and inscribed, showing Caruso as Manrico, in a racing car (1910), painting and dining with Felipe Galante, stoking a bonfire...

At the low auction estimate of 2000 UK pounds, the price does not seem too outrageous at 50 quid apiece. I would certainly pay 50 for the above postcard of Caruso in a racing car. In fact, since it is such an obvious cherry pick of the lot, I would pay a lofty 75 pounds!

With no mention in the auction description, the driver is Ralph DePalma. Born in Italy and raised in Brooklyn, DePalma almost won the 1912 Indy 500.

One of his most famous races was the 1912 Indianapolis 500. Leading by five laps with only 4 laps to the finish a connecting rod in his big gray Mercedes failed. Nursing the stricken car the remainder of the race, its big engine making terrible noises, the specter of the second place National driven by Joe Dawson bore down on them. The lead, which had been 5 laps, became miles and the miles became yards. With the checkered flag now in sight the Mercedes gave one last blast before turning silent. The crowd cheered DePalma when he and his mechanic got out to push but this day would belong to Dawson as he flashed by to take the victory.