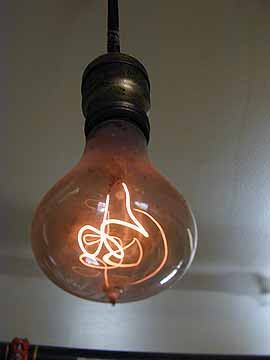 The Centennial Bulb has been burning for some 106 years - the last thirty of which it hasn't been turned off. Quite a bulb, and the Centennial deserves great respect, but it turns out it isn't that unusual. It is more a function of the manufacturing technique than some fluke.

The Centennial Light is a 4 watt, hand blown, carbon filament, common light bulb that was manufactured in Shelby, Ohio by the Shelby Electric Company in the late 1890s; many just like it still exist and can be found functioning.

On a modern bulb, the filament is so thin and uniformly curled that there is not much to look at. Besides, the light output is so high you can't really see the filament anyway. But these old, thick carbon filament bulbs are terrifically graceful and emit a glow something like a neon light.