How to Read Chinese Paintings Exhibit at Met 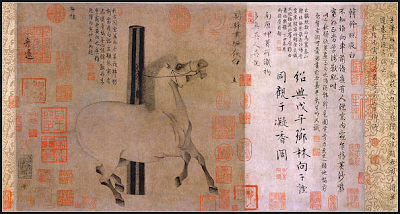 Although it would be great to see Anatomy of a Masterpiece in person, the NY Times has an interesting slide show and article on the construction of Chinese paintings.

From the New York Times:

The exhibition opens with “Night-Shining White,” a picture of a spirited horse by Han Gan, who lived in the ninth century during the Tang dynasty. By that point the criteria for a successful painting had been established, and the first was the ability to convey a subject’s vitality, or life-energy.

Han was a master of this, bringing an animal to life with contour lines and calligraphic strokes that look almost joltingly vibrant. And if that dynamism escapes us, the testimony of generations of connoisseurs is there to confirm it: the horse is hedged in by a halo of seals applied by scholars and artists over the centuries. Each is a stamp of approval; together they are a storm of applause.

Comparatively, Metropolitan Museum of Art website has an explanation that is a bit more pedantic:

Why are red stamps placed all over this painting?

These red stamps, called seals, are the impressions made from stones and other materials that have first been pressed into red seal paste. Seals are marks of authorship or ownership, belonging either to the artist or to later collectors.

Though seals have been used on documents in China since the late Zhou and Qin dynasties, it was not until the Tang dynasty that imperial seals appeared on works of art registered in the imperial collections. Painters began applying their own seals, in addition to their signatures, on works of art during the Song dynasty.

The seals, colophons, and inscriptions by later collectors and admirers of a painting are not considered external or damaging but rather lend honor and value to the work of art. These later collectors also carefully considered the placement of their seal impressions. The seals of well-known artists, critics, and personalities from the past applied on a painting provide a deep sense of enjoyment and a feeling of connection with the past...

A great example of why the New York Times is consistently compelling and why art history education is not quite as reliably interesting. I understand the delta in public vs. private charter, sources of funding and intended demographic, but the fact remains that the New York Times had me wide-eyed and wondering, while the Met description was a struggle to complete.

Link to New York Times
Link to Metropolitan Museum of Art
Posted by Mister Jalopy at 10:36 AM
Email ThisBlogThis!Share to TwitterShare to FacebookShare to Pinterest
Newer Post Older Post Home