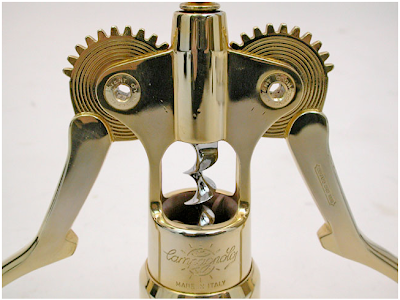 D+R pal Randy Dugan generously contributed this great post on the Campagnolo foray into the world of corkscrews. Naturally, they attacked the issue of cork removal as if the future of wine hung in the balance. At first take, the gold plate seems a little much but you warm to it. Sure, it is over the top, but more Bulgari than Cash Money.

The history and products of the Campagnolo company are legendary. The founder, Tullio Campagnolo, famously came up with the idea for the quick-release lever when his hands froze while racing his bicycle over a mountain pass, leaving him unable to unscrew the wingnuts that held his wheel in the frame. Tullio went on to invent (or steal, according to some people) the parallelogram-type derailleur, which adorns almost every chain-shifting bike made today. Along the way, the company also made cast wheels for Ferrari and helicopter blades for the Italian military. Campagnolo-equipped bikes had a near monopoly on Tour de France victories from the 1960s until the late 1990's. In the glory years before Tullio's death in 1983, the Campagnolo name was synonymous with innovation, precision and beauty, and its products remain supreme examples of industrial art.

Perhaps to commemorate its dominance in its industry, in 1974 Campagnolo released the "cavaturaccioli", a corkscrew that did for opening wine bottles what the company's bike parts had done for racing. Using one is a like closing the door of a Mercedes; it leaves the user with a sense-memory of mechanical perfection. While most were produced in pedestrian bronze or silver finishes, currently speedbicycles.ch, the website of a Swiss collector, is featuring a photo spread of a matched set of rare gold-plated versions of the corkscrew and its companion nutcracker.

Note that the pivot bolts for the arms are actually the same bolts that Campagnolo used to hold the chainrings to the crankarms on their legendary Record model cranksets. The rear derailleur in the photographs is a rare first-generation Super Record model, featuring titanium pivot bolts and a pulley cage hand-modified by drilling in an attempt to remove unnecessary weight.

Today, Campagnolo's market share has been dwarfed by component giant Shimano, but they are still the choice of a large percentage of professional teams, and they have a large, rabidly devoted following of recreational and amateur consumers.

The speedbicycles.ch site is remarkable and well worth checking out in its entirety. The photography is excellent and the collected items in this virtual museum are of the highest aesthetic and historic level. 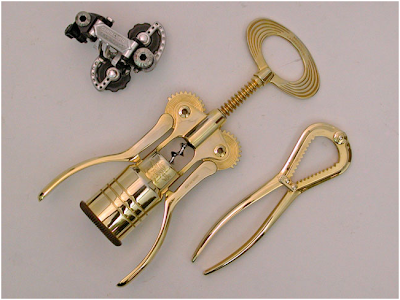