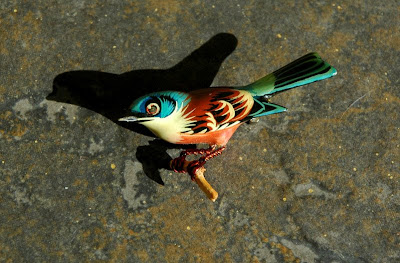 Collection of Mister Jalopy - Click for Larger Version
Prior to the bombing of Pearl Harbor, Yoneguma Takahashi supported his family with a produce stand near Knott's Berry Farm. When the war started, 110,000 Japanese Americans, including Yoneguma, his wife Kiyoka and their three sons, were compelled to abandon their possessions and were forcibly relocated to the Poston Camp in Arizona.

As was common at the camps, the families self-organized baseball leagues, built schools and conducted craft classes. At Poston, the Takahashis learned to make wooden birds. Carved from old orange crates with knives made from old hacksaw blades, the birds were often perched on a twig of desert sagebrush. The wire legs were fashioned from window screen wire and the bodies were painted with whatever paints could be found.

After being interned for 3 1/2 years, the Takahashis returned to Orange County and began carving birds in their home, which also served as a workshop and storefront. Yoneguma would carve, Kiyoka would hand paint, and the kids were paid a dollar a pop to make the wire legs. Despite the Takahashi's lack of self-promotion, the birds went on to be sold by such venerable retailers as Gumps and Abercrombie & Fitch.

The Takahashi family endured many hardships and even so do not harbor any animosity towards the United States for how their family was treated. They were able to transcend the treatment they received and to look on the bright side of their situation. Also, they learned the craft that allowed them to achieve their "American Dream" in the Japanese-American Internment Camp in Poston, Arizona. Their cage became their teacher. One can only hope that if forced to relinquish freedom without explanation or cause one would raise to the level of understanding and forgiveness displayed by the Takahashi Family.

I didn't know the Takahashi story at the time, but when I saw the bird pictured above I was immediately smitten by its exquisite detail and glossy perfection. Though made in the United States and crafted by Americans, the birds have an undeniable Japanese influence of restraint in both materials and execution. Hand painted and sealed with coats of lacquer, they seem to reflect more light than they absorb, so much so that a Takahashi bird appears to glow from within. Since I don't wear jewelry, I will frame my Takahashi bird in a tiny shadow box.

There is nothing more American than a Takahashi bird.