Cocktail of the Moment: The American Airlines Black Russian 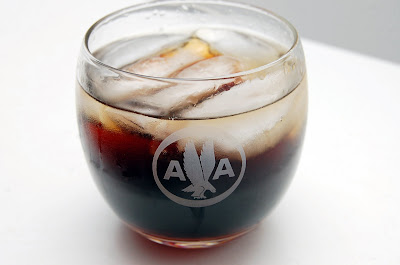 During the mid-1980s, I worked for a while as the afternoon bartender at a popular nightclub in Providence, Rhode Island. (It's still there, actually!) The place played host to many popular bands, so it was always packed at night. But the afternoon crowd was quite a bit more sparse, and a lot more desperate. The scene was sort of like Billy Joel's "Piano Man" -- only without the guy playing piano. And for whatever reason, the Black Russian became my cocktail of choice as I served the sad businessmen the drink they called Loneliness.

Fast-forward almost 20 years and, after a long hiatus, I've recently rediscovered the Black Russian. It's a simple cocktail -- just two parts vodka to one part Kahlua -- but it goes down easy and it packs an efficient punch.

According to the Wikipedia, the Black Russian "first appeared in 1949, and is ascribed to the Belgian barman Gustave Tops, who created it at the Hotel Metropole in Brussels in honor of Perle Mesta, then U.S. ambassador to Luxembourg. The cocktail owes its name to the dark period of the Cold War with the Soviet Union."

Hey, I can work with that! And when consumed in a vintage piece of American Airlines glassware in the safety and comfort of my own home... well, let's just say that the experience feels a lot flying First Class.
Posted by Todd Lappin/Telstar Logistics at 2:49 PM
Email ThisBlogThis!Share to TwitterShare to FacebookShare to Pinterest
Newer Post Older Post Home