The Cobra Plant (Darlington Californica ) is a ingenious species of pitcher plant. Native to the Pacific Northwest, it grows in cold wet soils depleted of nutrients. Like all carnivorous plants, it deals with low nutrient soil by supplementing its diet with insects. The pitcher plant family uses straightforward engineering to get fed - a tube filled with water and lined with slippery hairs provides a watery grave for insects that wander in.

The Cobra Plant distinguishes itself with a clever bit of trickery - the entrance to the pitcher is provided by a small hole underneath the hood. The hood itself is composed of semi-transparent windows. Once the insect is inside the pitcher, it attempts to fly towards the light of the windows. Confusing! The structure of the trap makes me think of lobster traps. 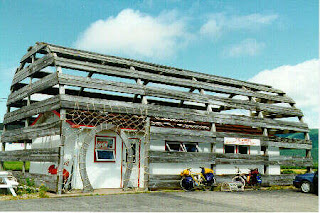 Pictured above is the World's Largest Lobster Trap from Cheticamp, Nova Scotia. According to wlra.com (world's largest roadside attractions) the lobster trap was dismantled in the summer of 1998. No news on any giant landlocked lobsters has been sighted since.
A delicate aspect of growing Darlington Californica in Southern California is that it expects its roots to be a cold, wet, 60 degrees Fahrenheit. I've been flushing the root with cold water from my water cooler, but I'm hoping to build a micro-refrigerator using a peltier junction.

Peltier Junction is an interesting physics effect you get when running current through two different conductors, where one side gets quite hot and the other quite cold. You can reverse which side is hot by switching the direction of current flow. The Peltier effect was discovered in 1834 but it took the discovery of semiconductors that conducted electricity well and heat poorly for it to become at all useful. It's far less efficient than typical air conditioning systems, but for cooling a small area (like the base of a house plant) it could be a practical option. Electronic Goldmine has surplus peltier junctions with a helpful heatsink already attached.
Posted by adamgoldmangothiscatpregnant at 5:57 PM
Email ThisBlogThis!Share to TwitterShare to FacebookShare to Pinterest
Newer Post Older Post Home