If Leonardo DaVinci Built a Barbeque 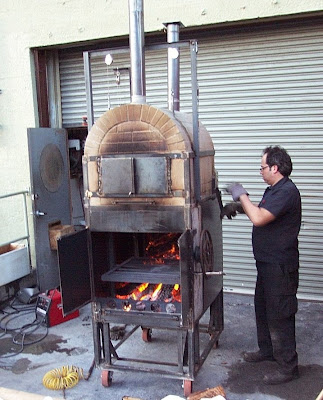 Mister Jalopy's complaints about the overpriced and underbuilt Beehive Pizza Oven got me thinking about a project some friends created a few years ago. It's called the Shenkendaurstein, and it answers a question that all of us have asked at one time or another:

"How can I grill 4 steaks, roast 2 chickens, and bake a pizza -- all at the same time -- with no electricity, using only mechanical power to regulate the temperature and turn the rotisserie?"

The Shenkendaurstein is the answer. Designed and fabricated in San Francisco over the course of a year by Jon Shenk, Christian Dauer, and Nikolas Weinstein, their clever machine is a custom-built mechanical 3-in-1 barbeque grill, rotisserie, and pizza/bread oven. 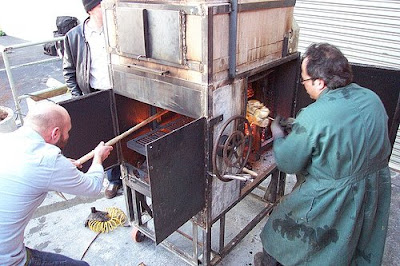 Toiling away at Nikolas Weinstein's glass studio, the three innovators developed a variation of a "smokejack" design. Originally sketched by Leonardo DaVinci around 1480, a smokejack is a machine that turns a spit using a flywheel powered by the current of smoke that rises from a chimney. Only, instead of using smoke, the rotisserie in the Shenkendaurstein is powered by a big bucket of water hoisted high into the air. As the bucket slooooooowly drops from a pulley attached to the oven frame, it feeds energy to the rotisserie via a complex clockworks: 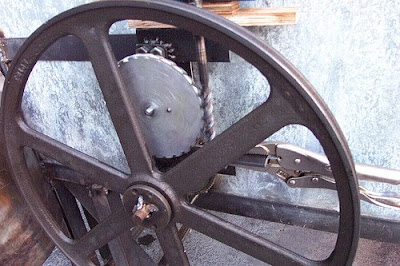 On January 21, 2006, The Shenkendaurstein was ready for its first big test drive. The fire was lit, a table was set inside the workshop where the cooking machine had been built, and many delicious foods were (simultaneously) baked and grilled and grilled and baked: 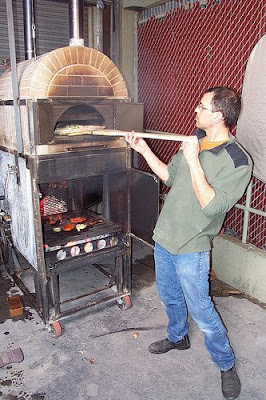 Then we all ate: 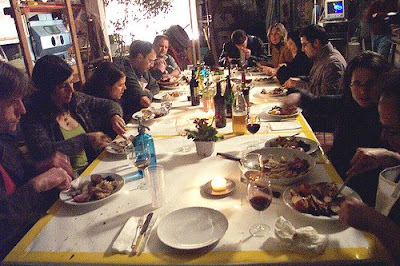 It was delicious! The meats were cooked to tender perfection, and the pizza had a crunchy, delicate crust. I took a lot of pictures during that yummy night, so if you're curious, you can see more of them here.
Posted by Todd Lappin/Telstar Logistics at 7:50 AM
Email ThisBlogThis!Share to TwitterShare to FacebookShare to Pinterest
Newer Post Older Post Home