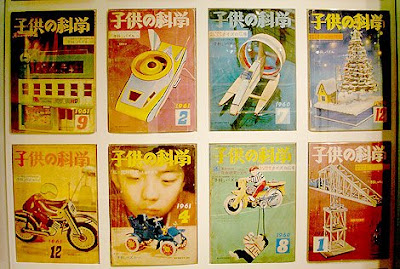 PingMag reports on an exhibition of projects from Kodomo no Kagaku (”Science for Kids”) magazine, which has been around since 1924.

Kodomo no Kagaku (”Science for Kids”) was and still is a magazine that introduces the fundamentals of branches of science from botany to space exploration. The magazine was perhaps most famous for its science projects, which would teach children to make things such as paper airplanes and miniature models of household appliances. Kodomo no Kagaku was founded in 1924, and since then it has garnered many loyal fans, including many people who continue to read it long after becoming adults, scientists – and even Nobel Prize winners.