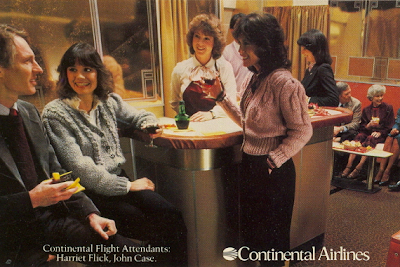 In the pre-regulation go-go days of air travel, the major airlines competed on swank amenities more than price. The peak of outrageousness was clearly the 1970's on-board cocktail lounges in coach class. A Singapore Sling with fellow boozers would go a long way to soothe the jangled nerves of tentative flyers.

The oft mentioned absence of jet packs as evidence of a future utopia unrealized is somewhat lost on me. As a kid, I saw the future I was interested in and it was 1979. Jet travel, dry roasted peanuts, slender More cigarettes, Harvey Wallbangers, ascots and Truman Capote at Studio 54.