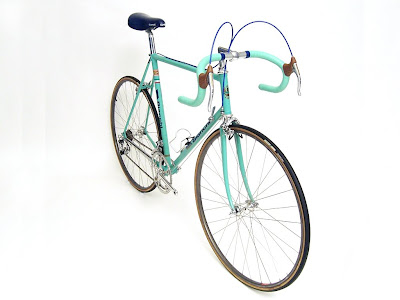 In the cycling world, pantographing generically refers to the customizing of components, usually with the brand name of a bike manufacturer. It became popular in the 1970s, and remained in vogue through the 1980s. Stems, shifters and outer chainrings were the most commonly seen "panto" items, but some brands went to great lengths to create special pantographed editions of their top machines, with nearly every component altered in some way. Ray Dobbins, a Florida collector, has put a great example of such a machine, his 1984 Bianchi Specialissima, up for auction on eBay.

Pantographed bikes represent an unusual mix of handcraft applied at the industrial level. While pantographing specifically refers to an engraving method used to duplicate text and logos, on bikes it was often seen in combination with milling, polishing and painting. All these techniques are in evidence on this machine, done by hand, in small numbers. 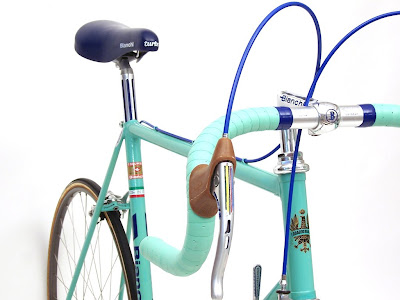 The milled flutes in the seatpost have been extended and filled in with blue paint, as has the Bianchi text pantographed onto the 3TTT stem. The shifters have been milled smooth on one side and then engraved with Bianchi logos and decorative panels, which were then hand-painted. The brake levers have had several slots milled in their sides, and on the front, the Campagnolo logos have been polished off and five parallel grooves have been milled into their faces. These were then filled in with paint in the color scheme know as "world champion stripes"; the green, yellow, black, red and blue bands have to be earned. They indicate that a Bianchi was at some point ridden to victory in the world championship road race (actually, many were). 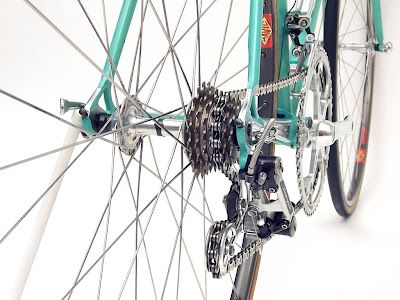 On this bike, Bianchi also painstakingly modified the shape of the brake calipers and crankarms to reduce their weight (or, possibly, just because it looks cool). This resulting part is known, perhaps surprisingly, as a "Mexico" version, not because the work was done there, but because cycling legend Eddy Merckx, a fanatic for lightweight equipment, rode one of the first such modified cranksets in his successful attempt to set the world hour record in Mexico City in 1972.

Ray's remarkable photo results are explained in detail on his site as well. 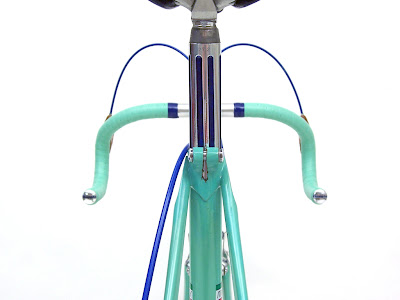