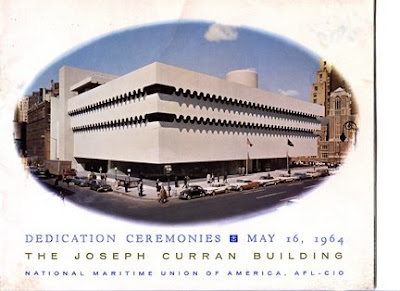 Photo from Docomomo
I have always thought the Curran O'Toole building looked like recently separated paper perforations. The cantilevered segments make the hulking structure look like the paper was just ripped as the floors moved forward. Preservation Magazine reports that the former National Maritime Union building may be torn down to make way for a new hospital.

Designed as the headquarters for the National Maritime Union and now a part of Saint Vincent Catholic Medical Centers, this midcentury classic, set in historic Greenwich Village, is one of the most flamboyant in New York. With cantilevered levels and a facade covered in tiny white tiles, the structure is a playful anomaly among more sober neighbors, its highly expressive style reminiscent of buildings by Edward Durell Stone. It is also massive, spanning an entire city block. In 1964, architecture critic Ada Louise Huxtable wrote, "There is no reason why the [National Maritime Union] could not have … added another cheap, dull, routine box with a shiny facade and a big sign to the New York scene...It decided, instead, to go for architecture. Whatever reservations may be held, New York needs more of those decisions." Today, the financially beleaguered Saint Vincent's wants to construct a new, more manageable hospital on the site, leaving the fate of Albert Ledner's building in doubt.