I live in Los Angeles' San Fernando Valley, where 108 degree summer days are not unusual. Most of the 1/2 acre lot our house sits on is covered with a thirsty lawn that turns brown the instant it is denied its daily drenching of water. It's ridiculously expensive and wasteful to use that much water on grass that can't even stay green, so my wife and I are looking for alternatives to a traditional lawn. Our search led us to the Theodore Payne Foundation for Wild Flowers and Native Plants, an organization dedicated to the understanding and preservation of California native flora.

Theodore Payne was born in North Hamptonshire, England and served an apprenticeship in horticulture. He came to Los Angeles in 1893 and fell in love with the California flora, dedicating his life to its preservation.

Even in the early years of this century, native vegetation was being lost to agriculture and housing at an alarming rate. He urged the use of California native plants and lectured across the state on preserving the wild flowers and landscapes native to California.

In his own nursery and seed business, which he started in 1903, native wildflowers and landscapes were his specialty. In 1915 he laid out and planted 262 species in a five-acre wild garden in Los Angeles' Exposition Park. He later helped to establish the Blaksley Botanic Garden in Santa Barbara, planted 178 native species in the California Institute of Technology Botanic Garden in Pasadena, helped create the native plant garden at Los Angeles' Descanso Gardens, and advised the Rancho Santa Ana Botanic Garden in Orange County.

By the time he retired in 1958, Payne had made over 400 species of native plants available to the public.

We drove to the Foundation, which is in Sun Valley on the far north side of the San Fernando Valley. To get there, you have to drive down a street lined with auto body and metal recycling businesses that go on for miles. Once you hit the foothills, it suddenly becomes rural and picturesque. (Click on photos for enlargement) 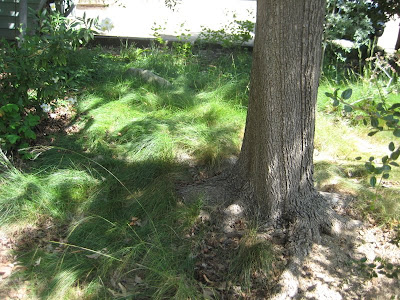 The woman who ran the seed store at the Payne Foundation showed us this drought-tolerant native grass. It stays green, and I like the way it sits in multi-directional clumps. I asked her how I could get rid of my existing lawn and she said I should water it thoroughly -- so the water soaks down eight inches into the soil, then cover the lawn with clear plastic. All the grass and weed seeds will germinate and die within six weeks. Then I guess I have to remove the dead grass and broadcast the native grass seeds. If we end up doing this, I need to call her and ask her for detailed instructions. 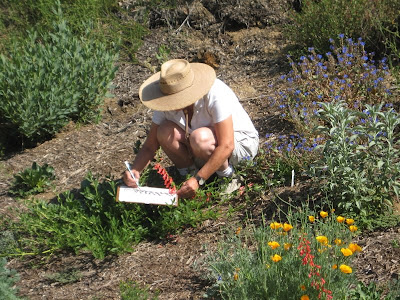 This woman was drawing plants by first tracing their shadow on her drawing paper. Cool idea! 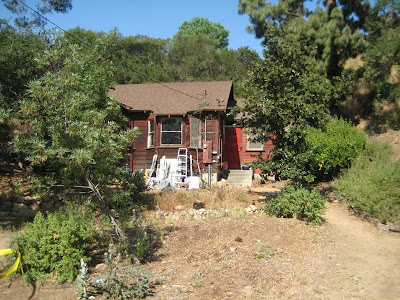 Here's where you can take classes about growing native plants. 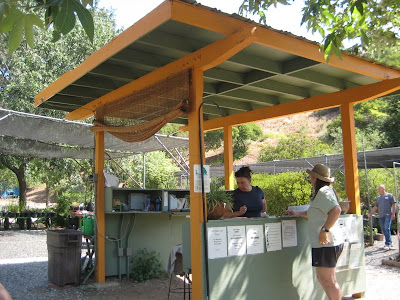 The wall-less shed where you go to get your bill for the plants you've selected is an example of simple and elegant design. The paint color selection is nice, too. 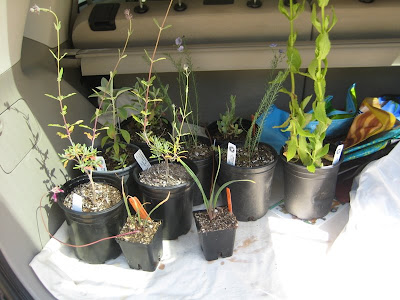 Here's what we ended up buying. It doesn't look like much. Once we put them in the ground, it still won't look like much. It will take three years for these native plants to really take off. The woman in the store told me that the first year, the plants will sleep. In year two, they'll creep, and in year three, they'll leap. I'm prepared to wait patiently for the leaping to commence.