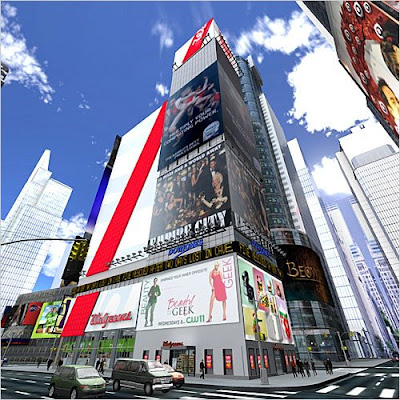 This morning's New York Times brings news that the largest sign ever installed in the United States is now being hung in Times Square. The giant sign, which cost roughly $15 million, will promote a new Walgreens drug store in the same building. The NYT sez:

The multicomponent, 250,000-pound sign will be programmed from street level to 341 feet high at the top of the building, on the traffic island between Broadway and Seventh Avenue at 42nd Street. Best known as the mother ship for a patchwork of billboards and the place where the ball drops on New Year’s Eve, the building was originally called the Times Tower, the 25-story, 1904 headquarters of the newspaper that gave the square its name.

The store is expected to be unveiled, and the billboard officially illuminated, next fall.

The sign will have 12 million light-emitting diodes, known as L.E.D.’s — 17,000 square feet of them, “which is more than a third of an acre,” said Arthur Gilmore, president of the Gilmore Group, a Manhattan design and branding consulting firm, which created the sign. “Including its digital and vinyl decorative components, it will be 43,720 square feet in area.”

The new spectacular “will be larger than any sign in Times Square,” said Barry E. Winston, a Times Square project consultant who has been a billboard expert for more than 50 years. He said it would surpass the current behemoth, the 11,000-square-foot Nasdaq sign on Broadway at 43rd Street.