(This is part 2 of a multi-part epic about re-building a chicken coop. Read Part 1 here, and Part 3 here.) 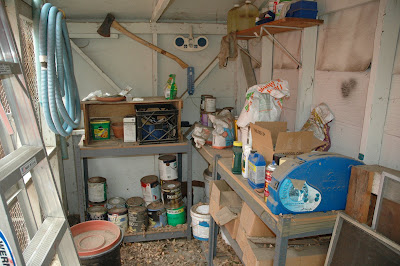 The photo above shows the interior of my shack before I cleaned it out. Disgusting, isn't it? The Collyer Brothers have nothing on me. 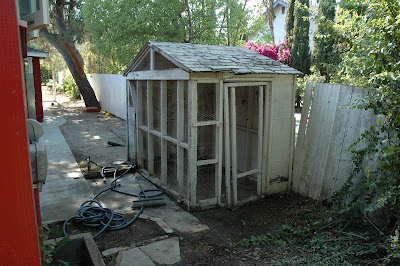 In addition to emptying the shed, I also removed the wooden gate that had been attached to the left side of the shed, as it served no purpose other than to scrape me with the rusty nail poking out of it whenever I walked by. I put the fence lumber in the pile destined for the dump (but as I'll explain later, I eventually retrieved it and put it to good use).

Note also the fence (right) that is separated from the shed. It looked like it was ready to collapse on my neighbor's property. I tried pulling it upright so I could secure it to the shed, but it wouldn't budge. It turned out that the fence was being pushed by a dozen two-inch thick branches from a fast-growing vine that ran along the fence. I spent several hours cutting the branches with a chainsaw and garden shears. My neighbor kindly offered to prop up the fence from his side and I gratefully accepted.

Now I felt like I had a blank slate to work with. I inspected the shed and came up with a list of things I wanted to do to it:

1. Build a new door to replace the rotten one.

2. Remove the worn-out roof shingles and replace them with a galvanized tin roof.

3. Tear off the rusty chicken wire.

4. Add wood siding to the lower part of the shed so that dead leaves and dirt won't blow in.

7. Build nesting boxes for the chickens.

10. Buy chickens and show them their new home. 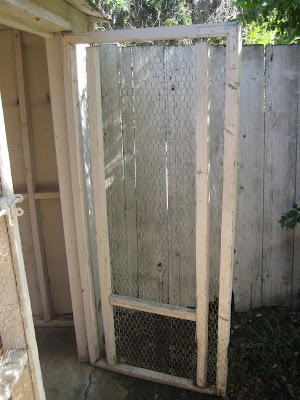 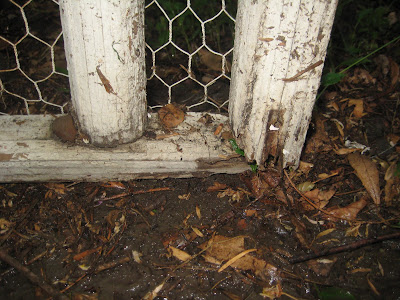 Here's the original door. The pieces of wood at the bottom were crumbling and separated from each other, making the door wobble cartoonishly when I opened or closed it. Not only that, but the design of the door looked ugly to me. Why had it been braced with a pieces of wood forming an "H" inside the frame? It didn't seem like an especially sound structural form. I was eager to get rid of it and make a new one from scratch.

I took the old door off, laid it flat on the ground and measured the rectangular dimensions. Then I went to Home Depot to buy some lumber and wood fasteners. Wandering down the lumber aisle at Home Depot with my shopping cart, I came across some nice looking lumber called "furring strips." I didn't know what a furring strip is (and even after checking the Wikipedia definition when I got home, I'm still not sure what it is), but it looked like a good choice for a lightweight chicken coop door, so I bought enough to make the frame plus an extra 50% to allow for screw ups.

I also bought a small rectangle of plywood, screws, and some metal L and T brackets.

I used a clamping miter box to cut the 45- degree angles for the frame, and used the brackets to attach the pieces together. It was going surprisingly well until I tried to attach the fourth piece, and discovered that the furring strips were so twisted that I couldn't complete the rectangular frame without seriously warping it.

Fortunately, I had that extra piece of furring strip, and it seemed straight, so I cut it to size and used it. But again, the frame wouldn't fit together! I think each piece was twisted just a little, and when I put the four pieces together, the twistiness became multiplied fourfold. I didn't want to make one of those infamous second trips to Home Depot, not unless I absolutely had to, so I forged ahead with the less-than-perfect materials at hand.

I screwed the old hinges onto the finished door and attached it to the shed. Yes, it's warped, but it's warped so that it presses tight against the latch when I close it. The springiness of the warp actually seems to have worked in my favor, for now, at least.

Here's a photo of the door, installed: 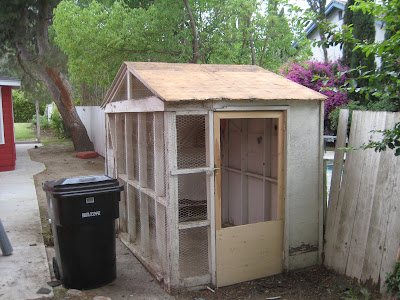 In the next installment, I'll add a tin roof to the coop.