(This is part 3 of a multi-part epic about re-building a chicken coop. Read Part 1, Part 2.) 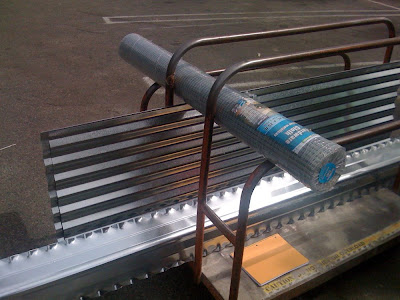 I attended 3rd grade in a quonset hut on the plains of Colorado, and ever since, I've longed for a building of my own with a corrugated metal roof. The chicken coop was my chance to realize that dream. Home Depot had what I needed, as shown above: roof panels and piece that fits along the peak. (I also bought a roll of screened wire to replace the rusty chicken wire I'd ripped out.) 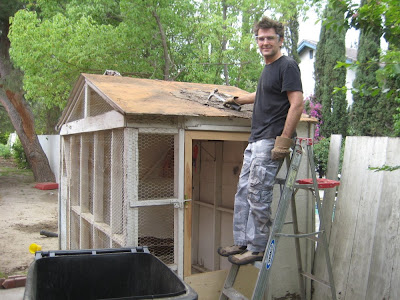 While I was on the roof tearing off the old tile, my neighbor came over to work on the fence that had separated from the shed. He told me the previous house owner had used the shed as a rabbit hutch. The baby rabbits regularly escaped from openings in the shack and would dig under the fence into his yard, where they'd fall in the pool and be discovered drowned in the filter basket. I assured him that my chicken coop would be the Fort Knox of poultry enclosures. 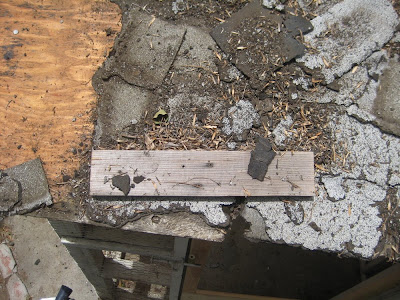 The grimy business of removing the disintegrated shingles was delayed by this piece of wood screwed into the roof at a crazy angle. I'm guessing that the rabbit tycoon used it to bolster the plywood under the shingles, which had become so rotten that it had split.

I thought about removing the entire panel of plywood and replacing it. I didn't want to do that, because the plywood measured about 6' x 7' and was very heavy. Instead, I used my jigsaw to cut off the rotten part and replaced the missing portion with a couple of fence slats from the gate I'd torn down a day or two earlier. You can see the fence slats on the roof in this photo: 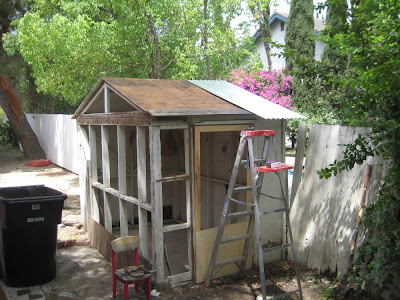 I was having an easy time screwing the lightweight galvanized roof panels into the roof. I didn't even have to use tin snips, because three panels fit perfectly on each side of the roof -- at least they did on the front side. I hit a snag on the back side. After I'd screwed down two panels on the back side, I laid down the third and was surprised to see that some of the roof plywood was exposed. It was a wedge-shaped area. Did I lay the other panels down at an angle so that they weren't square with the roof? I checked carefully and decided that I did indeed mess up. I unscrewed the panels and started again trying hard to keep things square. But the third panel still didn't cover the roof. I had to conclude that the roof wasn't built square.

In his book A Place of My Own: The Education of an Amateur Builder Michael Pollan writes about the nearly-disastrous repercussions of accidentally making a non-90-degree corner early on in the construction of a small office-house he built in the woods near his house. Because of one non-square angle, Pollan had to make custom-angle cuts for every window frame and door frame, for the floor, for the roof and for almost everything else. It was a nightmare. He finished the house, but it took much longer than it would have if everything would have been square.

Now I was facing the same problem. I saw three options: (1) I could try to rebuild the roof to make it square, (2) I could buy an extra tin roof panel and trim a wedge-shaped section to cover the exposed part the roof, or (3) I could cut the overhanging portion of the plywood to match the edge of the tin roof panel. I went went option (3). I figured if it looked terrible, I would go ahead and try rebuilding the roof to make it square.

I used the roof panel as a straight-edge and drew a pencil line in the plywood, then got on a ladder and used the jigsaw to cut out a pie-wedge. The result was ugly, because the overhanging plywood almost touched the beam at the lower end of the roof slope, but stuck out about two inches at the peak. Here's what it looked like: 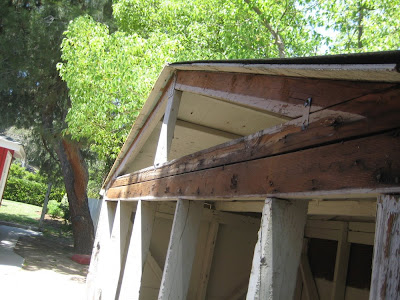 My hopes weren't high that this would work out, but I went ahead and screwed on the final roof panel. What do you know -- it looked OK. I asked my wife to come out and look at the roof. I didn't tell her about the problem, because I wanted to see if she could notice it on her own, and she's pretty observant. She eyed it, and said it looked great.

I think the flashiness of a tin roof does a great job at hiding faults. Wouldn't you agree? 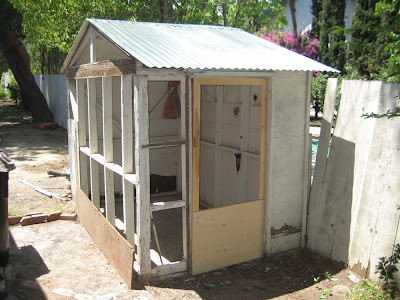 In the next installment I'll add siding to the coop.
Posted by Frauenfelder at 3:27 PM
Email ThisBlogThis!Share to TwitterShare to FacebookShare to Pinterest
Newer Post Older Post Home