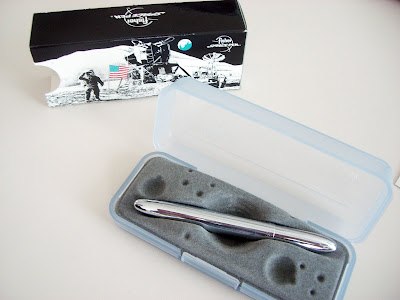 I have a friend who is a big fan of the Fisher Space Pen. He really likes the way it writes, but the pen's history is an undeniable part of the fun. As NASA's website explains:

Paul C. Fisher of the Fisher Pen Co. designed a ballpoint pen that would operate better in the unique environment of space. His new pen, with a pressurized ink cartridge, functioned in a weightless environment, underwater, in other liquids, and in temperature extremes ranging from -50 F to +400 F.

Fisher developed his space pen with no NASA funding. The company reportedly invested about $1 million of its own funds in the effort then patented its product and cornered the market as a result.

Fisher offered the pens to NASA in 1965, but, because of the earlier controversy, the agency was hesitant in its approach. In 1967, after rigorous tests, NASA managers agreed to equip the Apollo astronauts with these pens. Media reports indicate that approximately 400 pens were purchased from Fisher at $6 per unit for Project Apollo.

The Soviet Union also purchased 100 of the Fisher pens, and 1,000 ink cartridges, in February 1969, for use on its Soyuz space flights.

Anyhoo, my friend lost his Fisher Space Pen recently, so he had to buy a replacement. And here it is. What a treat! The graphics on the box are great, but best of all is the fabulous "lunar surface" packaging that holds the new pen inside the box. It's just a simple thing, but it's good fun, and it does a lot to reinforce the pen's Space Age mystique. Very clever.