Want to really understand the physics of a buckyball? Then make one! Though the ice cream cone buckyball is probably easiest, this origami buckyball will undoubtedly impress your friends the most (just don't let them touch it).

Speaking of which, what kind of cruel parents would name their child "Buckminster"? 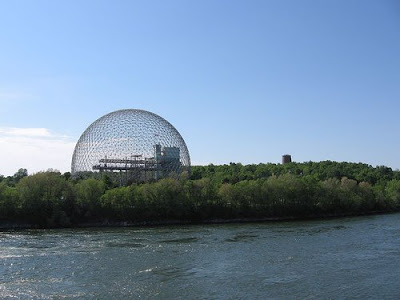 To learn more about Buckyballs and Buckminster Fuller's visionary achievements, stop by the Whitney Museum (New York) sometime before September 21; you'll be treated to many of Fuller's original designs, models, sketches, paintings, and more.

Not to nitpick, but to satisfy your curiosity: his first name is actually Richard and his middle name is Buckminster. His father's middle name was the same. Back in the 19th century middle names were often the surname of one parent or the others maternal line, the mother's maiden name or some other relative with a different surname. That's why you often see odd, by our standards, middle names back in those days like: James Fenimore Cooper, Susan Brownell Anthony, Thomas Alva Edison etc. (Edison's mother's middle name was Matthews.)