The Future Has Been Sold... 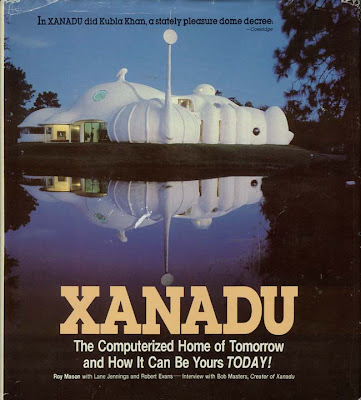 The creator of the Xanadu homes, Roy Mason, had high aspirations: to give the world a glimpse of the future in the form of a three high-tech homes. The homes wouldn't just look all bubbly and futuristic (which might have been good enough for me), they would also be constructed out of energy-efficient polyurethane. All in all, construction would be quick and relatively painless.

Inside, the homes would be entirely automated using Commodore computers to control every aspect of day-to-day life like climate, electricity, water, security, entertainment, shopping, the greenhouse, diet, records and bookkeeping, and much more. Roy Mason imagined some rooms with electronic equipment covering entire walls (Star Trek-styled)!

The Xanadu homes were finally realized in the late 70's and early 80's. Mason was ready to shatter our understanding of what a house could be. Visitors were invited to tour the homes. He said, at the time,

But within about 10 years, in the early 1990's, two of the homes had already been demolished and the technology of the last of the three had become obsolete. Here's how a tourist from that period describes a visit to the Kissimmee, FL house:

Already, the Future was passing by Xanadu at a fast clip. Gatlinburg's foam home had gone under, and the Dells version was struggling, adding jokey robots and pricey souvenirs in the gift shop.

In Kissimmee, knobby electronics accessories and DOS computers that raged in the '80s were starting to look like Third World office hand-me-downs. The waterfall spa was dry and covered with a sheet of worn Plexiglas; the ferric oxide in the video fireplace tape was so old you had to look twice before you realized something was on the screen.

This final Xanadu was put up for sale in 1997 and bulldozed in 2005. The Xanadu dream had been dashed to pieces; it would be no more. 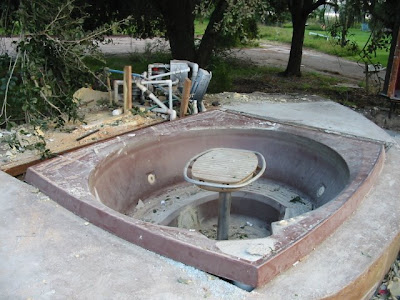 Video of the interior of the Xanadu home
Photos of the last Xanadu home being demolished
Roadside America article
Posted by Robyn at 11:51 AM
Email ThisBlogThis!Share to TwitterShare to FacebookShare to Pinterest
Newer Post Older Post Home