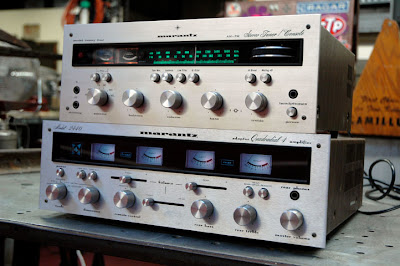 Marantz Model 24/Marantz Model 2440 - $10 each
Though there are more valuable stereo components from the 1970's, there is nothing in the world that screams Hi-Fidelity like a stack of brushed stainless Marantz components. Since I grew up with a receiver like the one pictured on top, I am probably forever doomed to having a lifelong crush on Marantz.

When I was a teenager, I ran a gun store a couple doors down from an independent chopper shop owned by my pal, Lil' Jon. Though 20 years his junior, we became buddies as we both were aficionados of the Apple II computer, high compression engines and getting loaded. We spent some wicked long nights in his shop drinking beers, recounting biker stories of stealing copper cable in Chicago and, most germane to this discussion, listening to his completely awesome stereo.

Jon had assembled a 6' tall stack of components for which the sole criteria were loudness and an abundance of VU meters. Built in a vintage (likely stolen) equipment rack and draped with a Vietnam-era camouflage parachute, it was a stunning rack of power and I could happily spend hours adjusting the graphic equalizer until I found what I was certain was the bass-heavy sweet spot for Black Sabbath's "Sweet Leaf."

"My bros would bring over new alblums before they got fucked up and we would record it to reel-to-reel tape," Jon recalled. He always added an extra L to "albums". 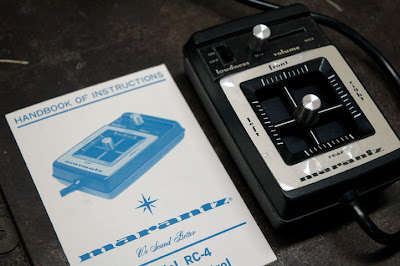 Marantz RC-4 Remote Control (NIB) - $3
Turns out there were a half dozen competing quadraphonic sound technologies and none of them seem to have been wildly effective or long lasting. Not until home theater was there a significant demand and acceptable technology to coalesce behind a single surround-type technology. For those new to quadraphonic sound, the idea was to put a speaker in the corners of a room and split the audio signal into four discrete channels of sound, as opposed to the typical two channels of stereo.

Since my father owned a car stereo shop on Ventura Boulevard in the 1970's, I asked him about quad. Not only did he have a quad set-up in his ex-post office truck daily driver, he would go out to his van to hear the weekly quad listening hour on a local LA rock station! How did it sound? "Like four speakers - I could never detect a real difference."

So, the Marantz Model 2440 which I plucked from a garage sale is outfitted with three of the numerous flavors of vintage 70's quadraphonic sound - discrete, SQ and Vari-Matrix.

SQ according to wikipedia:

The early SQ decoders could not produce more than 3 db of separation from front to back. Early "Logic" circuits were introduced to enhance separation to 20 db, but provided poor performance, very noticeable gain-pumping and an unstable, 'swaying' soundfield. The SQ system also faced resistance from broadcasters, since while essentially a 2-channel system, and totally stereo-compatible, it could have substantial mono compatibility problems - which posed serious issues with monophonic radios & all televisions of the era.

By the time that the most advanced Logic System was introduced for SQ, the Tate Directional Enhancement System invented by Martin Willcocks, "quad" was already considered a failure.

That is all so damning, one would think that would be the end of the story, but I am not dissuaded. I am not an audiophile and I do not have a golden ear, but I am extremely interested in the blunt force trauma of the awesome clarity and unambiguous nature of completely rocking out. There are tons of quadraphonic albums on eBay and it is only a matter of time until I find a quadraphonic 8-track player at a garage sale for $1. Besides, it turns out that quad receivers are selling on eBay for less than two rolls of quarters so, from a cost of fun perspective, some quad audio experiments are a pretty good value.

Besides the aforementioned technical snafus, there will be the issue of availability of key releases as I imagine Iggy Pop's "Raw Power" is not available in quad. What about Ziggy Stardust? And Black Sabbath's "Paranoid"? Or, at the opposite end of the spectrum, what if a friend excitedly brings over a quadraphonic Yes album and I am not able to keep from ripping it off the turntable to smash it to bits?

One remaining question for the audio geeks - can I enjoy the full quadraphonic experience on my Uher reel-to-reel recorder? 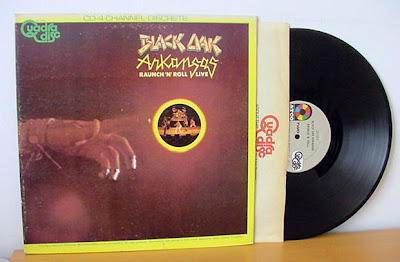 Typical eBay Album
Ladies and gentlemen, let us now listen to the sweet sounds of Nazareth.

Postscript: As the seller was clearly a sophisticate, I also picked up these perfect Klipsch woofers. How long will I have to wait to find a pair of La Scalas in Los Angeles with blown woofers? 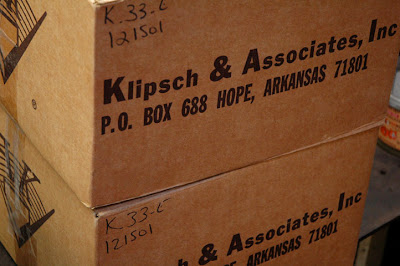 Klipsch Drivers (NIB) - $10 for pair
Much, much more on quad at wikipedia
Posted by Mister Jalopy at 9:48 AM
Email ThisBlogThis!Share to TwitterShare to FacebookShare to Pinterest
Newer Post Older Post Home