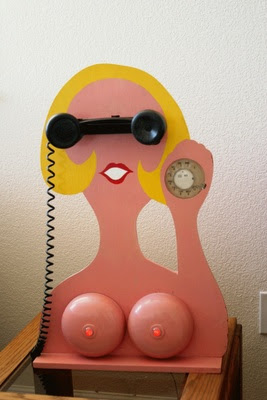 The handset was meant to be dark sunglasses. The nipples still light up when the phone rings. She really gets excited when someone calls.

You can tell mine is a later model than the one in the blog post because of the flush recessed dial. Mine is numbered 375 of 400.

Soon after 1975, Bob stopped making these phones. He considered himself an artist, and even though these phones were profitable, it was no longer a creative outlet.

Here's a short item from a 1971 issue of Popular Mechanics about the phones.