Miguel Covarrubias Mural: “The Fauna and Flora of the Pacific 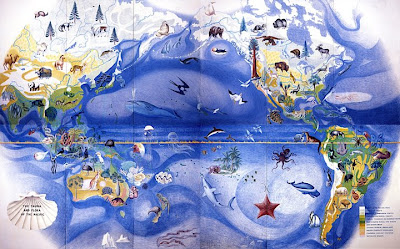 Jill Lynch (Assistant Director of Communications, Fine Arts Museums of San Francisco, Legion of Honor & de Young Museum) says: I know you're a fan of Miguel Covarrubias, so I thought you might be interested to know we've just installed his mural, the Flora and Fauna of the Pacific, one of a six part series he did for the World’s Fair of 1939."

“The Fauna and Flora of the Pacific,” from the mural set entitled Pageant of the Pacific, 1939. Pigment in a nitrocellulose base on Masonite. On loan courtesy of the City and County of San Francisco’s Treasure Island Development Authority.