Pietro Longhi's Account of Clara, the Fifth Rhino in Europe 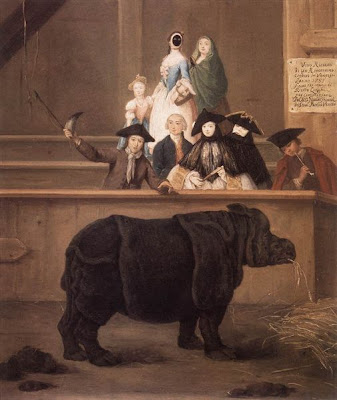 If the previous tale of Europe's first rhino drowning off the coast of Italy was not sad enough, we present the tale of Clara. Rescued after her mother was killed by rhino hunters, Clara toured Europe for 17 years like a rockstar, in a specially built wooden cart . Treated to a life of being moisturized with fish oil, Clara made the rounds for gawkers to gawk. Around 1750, Clara lost her horn. Though it is not clear how this occurred, it is believed it was rubbed off but there are also accounts of the horn being cut off for safety reasons.

A captive, hornless rhino is about the saddest damn thing I can imagine. Pietro Longhi seems to have been similarly appalled as his painting of Clara includes aristocrats with Venetian Carnival masks holding the horn in ghoulish delight.

Previously on D+R,
The First Rhino in Europe
Posted by Mister Jalopy at 11:25 AM
Email ThisBlogThis!Share to TwitterShare to FacebookShare to Pinterest
Newer Post Older Post Home