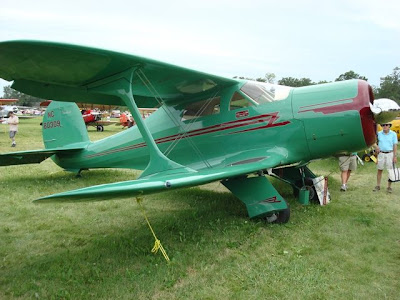 D+R pal Dale is back from the OshKosh AirVenture and sent us a photo of "the most beautiful plane ever made."

Per Dale's friend, David Hipschman, Director of Publications for the EAA (the organizers of Osh Kosh AirVenture):

It's a Beech "Staggerwing." They were manufactured between 1932 and 1948... used mostly for corporate transport, also famous as racing planes. Interesting historical note is that in the Spanish Civil War they were used as bombers and in WWII used by China as air ambulances and the Allies as personnel transport.

According to FAA records, based on the "N" or registration number on the tail, this one was built in 1946, and is a G17S model owned by the Zachry Construction Co, of San Antonio, Texas. Only 16 "S" models were built, out of the 781 total production run.