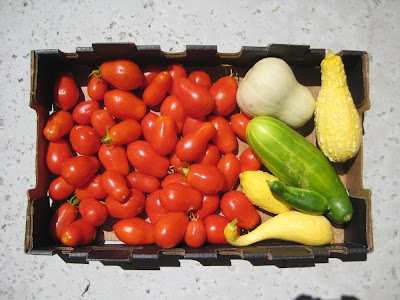 Sometimes our garden produce looks so good that I pick it and eat it right in the garden, without washing it first. Last week, I ate several figs, tomatoes, and basil leaves, cleaning them by wiping them on my T-shirt.

Since I had a lot of squash, I made a big pot of soup in a crock pot using squash, tomatoes (with the skin and seeds removed), basil, garlic, chicken stock, and cream. I was trying for a repeat performance of a terrific squash soup I’d made a week earlier. Our friends had dropped in just as it was done, and I gave them some. (One of them interrupted the conversation a couple of times to let everyone know she was having a religious experience from the soup.)

But my second batch of soup didn't work out as well as the first. The squash fruits were larger and the skins and the seeds were tougher. It didn't matter how much I pureed the soup with a high-speed blender, I could still feel the unpleasant sawdusty particles in my mouth. Carla had one small bowl. I had three bowls, trying to convince myself it was just fine.

A few hours later, as we were getting ready for bed, I told Carla my stomach was feeling bloated and rumbly. I asked her how she felt and she said she was fine. I figured the seeds and skins were working in my intestines like a dose of psyllium husks, and stopped worrying about it.

I woke up at 1:30 in the morning with a sharp pain that started in the pit of my stomach and went all the way up to my esophagus. The pain rose and fell in waves, never going away completely, just cycling between bad and excruciating. I felt hot and nauseated and my abdomen was swollen. Did the squash seeds make me sick? Just thinking about the soup made me feel worse. I got up and started walking around the house to alleviate my suffering. Moving around felt better than lying in bed. I stayed up most of the night.

At around 5 am I crawled into bed, feeling more miserable. I was exhausted and sick. For the whole day, I lay in bed motionless, not eating or drinking, and only getting out of bed to throw up or deal with a bout of diarrhea. Obviously, I’d gotten some kind of bug, and it wasn’t from the soup, which had been simmering in a crock pot for hours. I must have picked up something from the figs, tomatoes, or basil I’d foolishly popped into my mouth without washing.

I’d been cocky about not having to worry about the recent e-coli and salmonella breakouts in commercially-grown produce. But my pesticide-free produce was undoubtedly crawling with bad microbes, and it was crazy for me not to have washed them first, because they had invaded my gut and were causing all sorts of unpleasant havoc there.

Forty eight hours, and just as many trips to the bathroom, later I'm a wiser man.
Posted by Frauenfelder at 1:35 PM
Email ThisBlogThis!Share to TwitterShare to FacebookShare to Pinterest
Newer Post Older Post Home