Kevin Kidney! Winner of the 2008 D+R 'Defender of the Eternal Flame' Award! 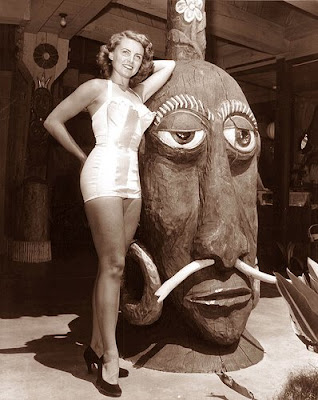 With great honor, Dinosaurs and Robots announces Kevin Kidney and cohorts as the 2008 winners of the D+R Defender of the Eternal Flame Award for their efforts in the restoration of the Mr. Bali Hai! Congratulations! 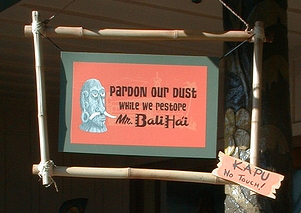 Rather than continue to grouse about the unfortunate condition and inappropriate color choices of Mr. Bali Hai, Kevin Kidney took the proverbial tiki by the nose and engaged in a pro bono restoration.

As Kevin tells it:

Mr. Bali Hai is the world famous Sort-Of-Tiki that has stared down each and every visitor to the Bali Hai Restaurant on Shelter Island in San Diego, California since 1953. And, in our highly-respected opinion this deadpan deity is a bona fide star in the American Pop firmament. The Buster Keaton of Tikis!

Hewn from one massive solid chunk of native Californian Julian Pine by an undocumented carver, Mr. BH is widely recognized thanks to a souvenir ceramic mug in his likeness, carried off to all corners of the world by the bazillions of folks who ordered the "Mr. Bali Hai" cocktail with dinner. 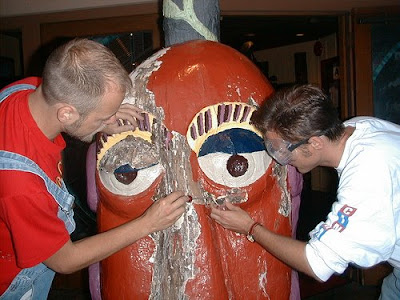 Egads! Look at the abuse of color palette that Mr. Bali Hai was subjected to!

About five pounds of moist, punky wood (think potting soil) had to be removed and the caverns scrubbed with a wire brush to get all contaminated wood out of there. The remaining fibers were flooded with termite pesticide and wood preservative. The "caves" were then coated in sealant, filled in with rock-hard wood putty, fortified with a layer of concrete, primered, painted and sealed again with three coats of marine polyurethane. 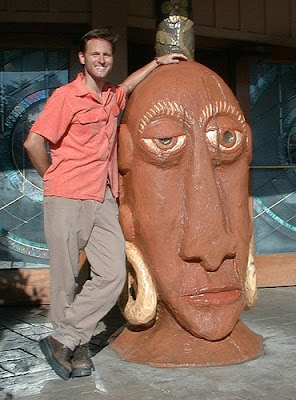 We applaud your efforts in doing your part to restore the earth to its correct tilt and rotation. We have no doubt that the restored Mr. Bali Hai will continue to lure eager tropical drink imbibers to the darkened lounge interior, only to emerge in the blinding sun with the onset of a horrifying headache. Thus, the earth once again turns, as the time honored tradition of extraordinarily bad midday drink choices continues uninterrupted.