The Little Boxes of Daly City 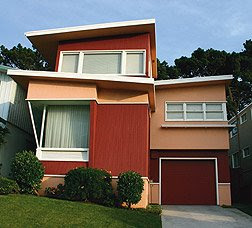 In 1962 Malvina Reynolds wrote a song called "Little Boxes," about the small houses built in the hills of Daly City. From Wikipedia:

Nancy Reynolds, daughter of Malvina Reynolds, explains: "My mother and father were driving South from San Francisco through Daly City when my mom got the idea for the song. She asked my dad to take the wheel, and she wrote it on the way to the gathering in La Honda where she was going to sing for the Friends Committee on Legislation. When Time Magazine (I think, maybe Newsweek) wanted a photo of her pointing to the very place, she couldn’t find those houses because so many more had been built around them that the hillsides were totally covered.”

If the photos from this Flickr pool are the little boxes Ms Reynolds was complaining about, she was nuts. I love 'em. Read more about them on the Retro Blog.

Rob Keil (who took the photo above) has written a beautiful photo book about these houses, called, Little Boxes: The Architecture Of A Classic Midcentury Suburb. (Via Neatorama)

Reader Mailbag!
Gary Peare says: "I think this is the kind of scene that would have prompted the song. Progress or blight? Kinda sad, either way."

Permaguestblogger Todd Lappin says: "Psst! Ahem! Ahem! I also went to a lecture by the guy who wrote that Little Boxes book. Fascinating stuff. I LOVE Westlake, and I've posted many many pics of the 'hood here."