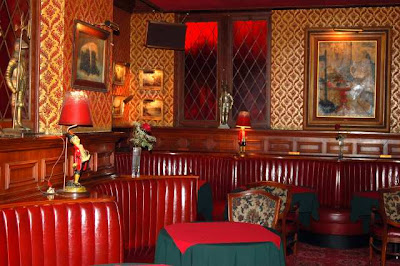 The Prince - A Korean Olde English Hunt Club
A wonderful resource on the odd pockets of Los Angeles that have escaped the relentless march of progress. The photography is universally poor, the web interface is a bit clunky and the writing is at once celebratory and grouchy. In other words, it is a hit!

For example, consider this excerpt about The Arsenal on Pico in West LA:

An increasingly rare old bar and restaurant on the West Side. Probably a good stop after eating at the Apple Pan. I did not get a chance to eat here, but I'm sure it's a nice restaurant. This is for a younger crowd than oldsters like me. I know the current generation loves music so loud you have to shout when talking, but I find it hard to carry on an intelligent conversation that way. I imagine there are times when the music is not so loud here, as the Friday night I visited.

Or this one about Musso and Frank:

I occasionally call the Musso and Frank Grill - Musso and Frank's - just to catch the search engines for people who refer to it that way. I generally don't like to call it Musso's, if for no reason than that's the popular way of referring to it.