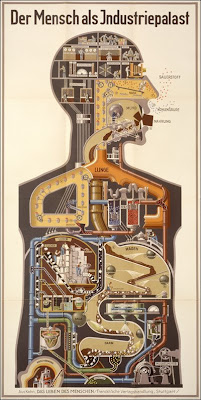 Der Mensch als Industriepalast (Man as Industrial Palace)
Though I was long familiar with Der Mensch als Industriepalast, I did not know that is was just a single illustration of many from a succession of Fritz Kahn's books comparing the anatomy of the body to industrial machinery. Probably lacks complete scientific accuracy, though Kahn certainly made beautiful and convincing metaphors.

From the excellent National Library of Medicine:

In the early 20th century, Fritz Kahn produced a succession of books on the inner workings of the human body, using visual metaphors drawn from industrial society—assembly lines, internal combustion engines, refineries, dynamos, telephones, etc. The body, in Kahn’s work, was "modern" and productive, a theme visually emphasized through modernist artwork. Though his books sold well, his Jewishness, and public advocacy of progressive reform, made him a target for Nazi attacks. Rescued by American agent Varian Fry, along with other prominent Jewish scientists and intellectuals, he was brought to America in 1940. 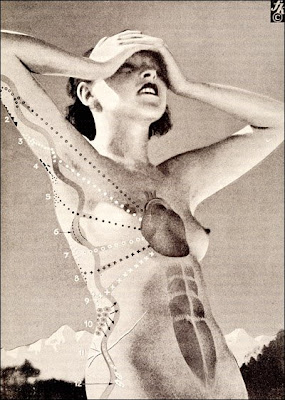 The positive effects of sunlight. 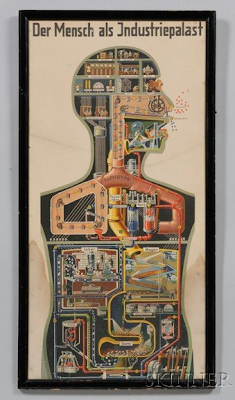 The above framed print is on sale at Skinner this week - an event that caused the rest of this investigation.