The Olympics are over... there will be no more dramatic flybys of the bird's nest stadium. It's time to get on with our un-olympic lives.

But one more view of the stadium won't hurt... especially if it's made out of Legos! 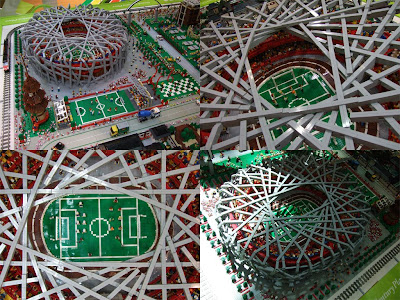 These same designers have built more of the Olympic village with Legos (like the swimming cube, the sport village, and the residence buildings). You can see all of these and more at the hklug's blog. 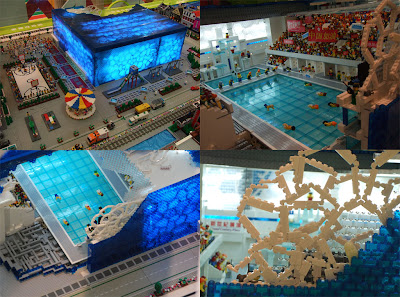 I have to admit... this Beijing Olympics made a deeper aesthetic impression than any other I've seen. It almost put all others to shame. The Beijing National Stadium seemed to be the central visual structure for it all. During the games it was ubiquitous, towering above, yet it did so with grace, sculpturally.

I guess it's not surprising that Ai Weiwei, the artist responsible for the stadium's concept, has blasted against the Beijing Olympics, calling them "fake and hypocritical." Ai Weiwei has said that the pomp and glow of the Olympics has nothing to do with the reality of China. Even the migrant workers who built the stadium were paid, on average, around $150 a month. He's called the Olympics "Beijing's pretend smile," and he refused to attend the opening ceremonies.

I ran into a great post on Scott Burham's blog: a potential early inspiration for the bird's nest, and a nod to the migrant workers who gave the facelift to Beijing and built the Olympics. In Beijing, Scott Burnham noticed intricately dense weaves covering the windows of high buildings. These weaves, according to Burham, were built by migrant workers as a basic protection. It's possible, Burnham theorizes, that Ai Weiwei was inspired by weaves. 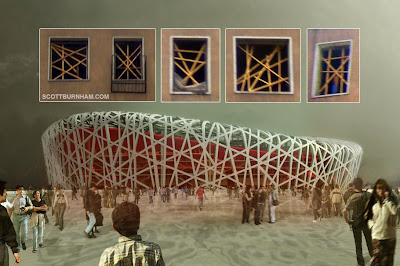 Though it may not be true, I like Burnham's theory. It take's China's great stadium – a stadium that's supposed to only symbolize China's economic viability – and it turns it on its head. Subversively, it also becomes a symbol of China's under-represented: its migrant labor workforces.

To wrap this whole Olympic thing up, we now officially award our own Official "Dinosaurs and Robots Big Pretend Smile" Gold Medal to... Exxon for the following commercial, which ran continually throughout the Olympics. Strange stuff...