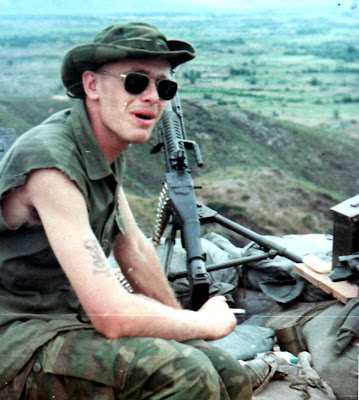 Eric Schwartz has posted and annotated an amazing selection of photos taken during his tour in Vietnam. A profoundly heartbreaking and fascinating personal account of a Marine recon unit in the deepest peril. 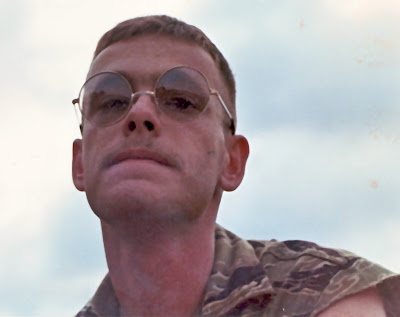 Flashback Viet Nam 1970
Here I am.... I just spent a week in the weeds. This is 1st Recon Bn, 1st Marine Divisions rear area. The place is called Camp Reasoner,(After medal of honor winner Lt Reasoner) LZ401,Da Nang. Have you any clue as to how a person smells after humping the the jungles of Nam? Pretty fucking rank. But now I am smelling fresh as a daisy. I cleaned my beloved rifle, stowed my gear, took a shit, shower and a shave. Then, I went over to the barber shop that was run by the Zips and got myself a stunning Marine Corps issue high and tight haircut. Wow, aint I cool in my tiger stripe cammy shirt and my hippy dippy purple tinted peepers. After spending a week putting my ass out on the line, doing what I loved best...Recon....(OOH RAH!!!), I think that when the sun goes down, I owe it to myself,to mosey over to a certain hootch, the one where the heavy People hang out , & have toke or two of that fine Nam herb, and just chill with my homies, maybe they will have some fine tunes on the Sony reel to reel. Cause you know what? In a day or two I ll be back out there mixing it up with Mr. Charles. So what are they going to do shave my hair and send me to Nam??? OOH RAH and Semper Fi!! and welcome back to the world to all of you jarheads, Squids, cannoncockers, grunts, seabees, dog faces, GI you Number fucking tens, medics, corpsman, wingwipes, sailorboys, airdales, deck apes, snipes, skivvey wavers, scouts, dog handlers,shit birds, KPers, coke machine officers m60 humpers, RTOs, donut dollies, nurses, chaplins, docs, cookies, river rats, tunnel rats, juicers, heads, rear area mother fuckers, supply clerks, ammo humpers, door gunners, crew chiefs, and all others that served in the Nam. Wannabees take a fucking hike!! 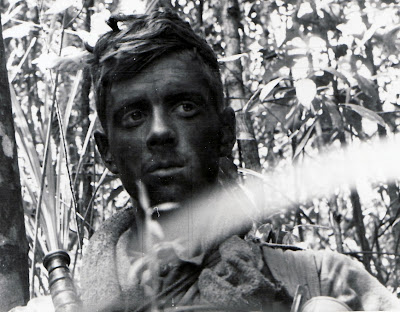 I never took a photograph until I arrived in Viet Nam. As soon as I got there, I knew that I needed to document my war experience in Nam. Thus, I bought a camera and launched my interest in photography. 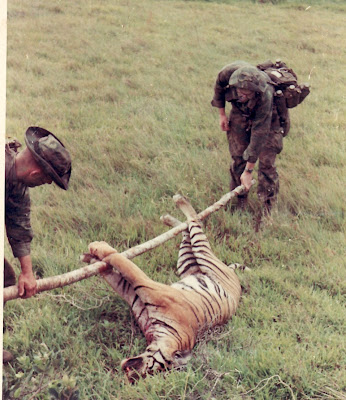 Sgt Phelger USMC was killed by a tiger on 5 May 1970. He was dragged from his harbor site during the night. His team found blood trails that lead to his remains the next morning. This tiger was killed by Sgt Larkins. The tiger was stalking the team. I was on my way to a insert helicopter with my team, when I took this photo.Just another peril of humping the jungle. A place were death lurked in many forms. The next time someone doesnt believe you have them ring me up. 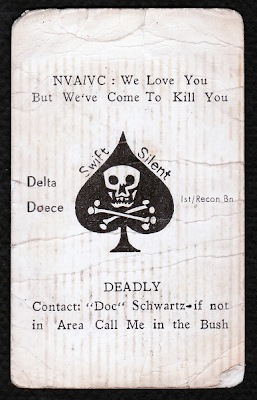 I asked for, and received, permission to post selections from Eric's copyrighted photos. Thank you, Eric.