The Rare and Exotic Devil's Cigar 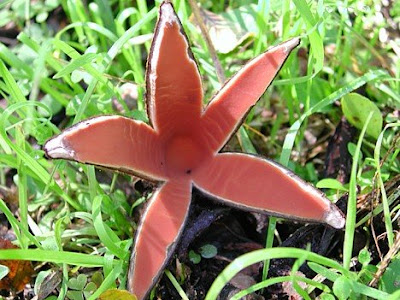 Today I photographed a brown mushroom surrounded by a pale white circle of spores. Had there been any breeze, many of those spores would have taken to the air and been carried a considerable distance.

A few years ago, my wife Minnie saw the rarest sight of all when a devil's cigar spewed a thin trail of smoky spores into a cool November morning. This strange fungus, known to botanists as Chorioactis geaster, resembles a dark brown cigar emerging from the ground.

At the appropriate time, the ugly cylinder splits open to form a striking tan star from which the spores are released.

The devil's cigar was first reported in Austin in 1893. It was later discovered in Kyushu, Japan, but 38 years passed before it was again seen there."

Meanwhile, all this devil's star ruckus has found its way to the Texas Legislature, where the star has been proposed as a new state symbol.