The Rich Abundance of Our Bing-Bong World 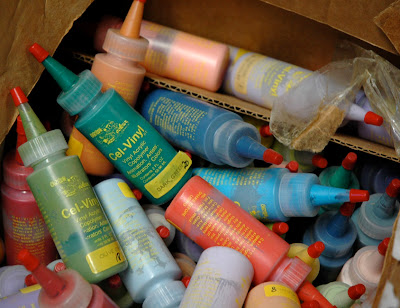 On March 13, esteemed co-conspirator Mark F. posted about his torrid affair with Cartoon Colour Cel-Vinyl paint. I found it interesting that such a product existed for the waning art form of hand painting cartoon cels but beyond that, as I am not an artist, I did not give it a lot of thought. Until yesterday.

Since I own a retail store engaged in the sale of used bicycles, it is not unusual to run across curious characters trying to sell derelict bikes. After I turned down their pair of broken Wal-Mart style mountain bikes, some fellows hung out in front of Coco's for bit, drank 20 free Dixie cups of my delicious RO water and then left a trail of garbage in their wake. Disgusted but not surprised, I picked up after them and had I not remembered Mark's post on Cel-Vinyl I would never have realized I was carrying a box of liquid gold!

Mark and I are having lunch this week and won't he be surprised to receive such an expensive and thoughtful gift!
Posted by Mister Jalopy at 7:46 AM
Email ThisBlogThis!Share to TwitterShare to FacebookShare to Pinterest
Newer Post Older Post Home