Earlier, Jenny Hart posted about the charming split pea of a car, the Bianchina. I knew little about it but that did not dissuade me a whit from pontificating on the subject at some length.

Then, the emails started and the knowledge started to flow.

D+R reader Ed pointed out that it was a Bianchina and that it was based on the mechanicals of the venerable Fiat 500. 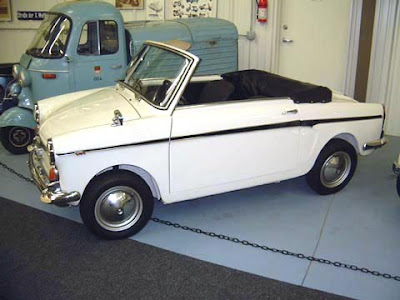 Photo: Microcar Museum
D+R reader Michael pointed us to the Microcar Museum, which, naturally, has a Bianchina in its collection. Previously, I pointed out that the Binachina was not much more than a fluffed up Vespa, but I had no idea that Vespa actually did make a car. 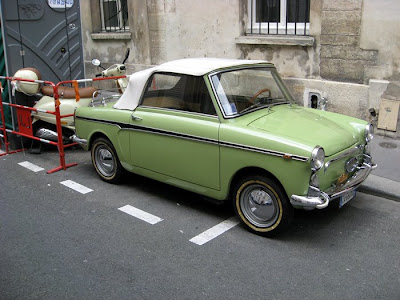 But, D+R reader Aaron took the cannoli! He photographed the exact same car in Paris - right down to the masking tape white wall tires! I suspect that tape ring is a protective covering that was not removed on a set of NOS tire.

It was a bit of a shock to see a picture of the exact same car I took a picture of earlier this summer, but not really unexpected, I suppose. Albeit, at this moment the car was parked in a slightly more reputable neighborhood near Place des Vosges, so we do know that it is running well enough to navigate halfway across town. Regardless, here's the little bugger with its top up, next to a scooter for size reference.

The only remaining question, just how seedy is Strasbourg Saint-Denis?