Choking on One's Own Belly Button

My wife and I were in Seattle last weekend for Bumbershoot. (Beck was good). While we were there, we stopped by the Elliot Bay Bookstore, and I picked up a Tezuka comic for my son. This was one of those books that jumps off the shelf into your hands – the colors were so hypnotically awesome (and everyone knows you can judge a book by its cover) – I had to take it home with me... 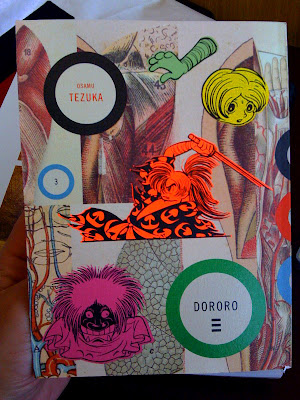 My son read it lightning fast and promptly left it sitting around on his dresser. Yesterday, I picked it up and began flipping through it, deciding whether or not I'd read it because not absolutely everything Tezuka wrote was pure genius. I opened the last page and saw only one small drawing and one bizarre line. Here they both are (and don't worry, neither of them are spoilers to the plot): 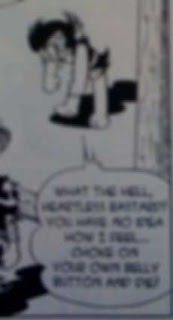 As you can see, at such close range, my cell phone camera transformed the book into a blurry mess. So, in an effort to offer you a more crystal clear image, I've conveniently reinterpreted the character in the drawing. I think there's no question about it: my interpretation not only maintains the emotional spontaneity and depth of the original, it also adds a delicious sense of childlike playfulness! 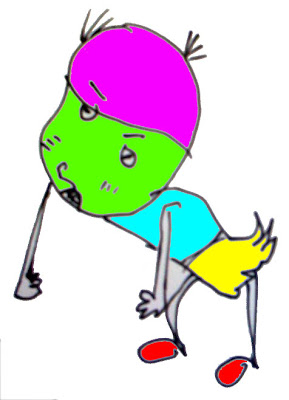 And in case you were unable to read Tezuka's original panel, the character is saying, "You have no idea how I feel... Choke on your own belly button and die!" (Imagine the above character saying such a thing... it's frightening, isn't it?)

I drew a picture of someone choking on their own bellybutton, but it really looked like the person in my drawing was choking on something else. I didn't want to offend the kind readers of our Dinosaurs and Robots Family-Friendly blog, so I have not included this drawing.

Still, I am sincerely perplexed. And fascinated. How exactly does one choke on one's own belly button? Is this a common Japanese insult?... or perhaps an ancient one? Is it a joke... does Tezuka expect us to laugh (because I laughed)? Or was this line of dialog censored because the original was considered inappropriate for a U.S. audience?

Hmm... or maybe I've missed something by not reading the book.

I asked my son about it and he didn't seem to know. In any case, I've decided I like the phrase and will start using it whenever I'm mad. "Choke on your own bellybutton!"
Posted by Robyn at 2:39 PM
Email ThisBlogThis!Share to TwitterShare to FacebookShare to Pinterest
Newer Post Older Post Home