Experiments and Observations on Electricity, Made at Philadelphia, by Benjamin Franklin 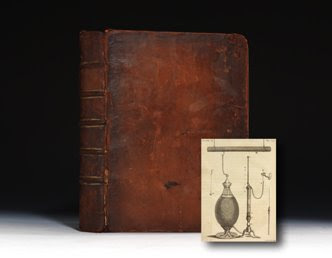 Bauman Rare Books in New York is selling a copy of Benjamin Franklin's Experiments and Observations on Electricity for, I think, $22,000. That is a lot of money, make no mistake, but it really is a fascinating object from the early United States. As Bauman points out, this volume represented America's first great scientific contribution. A better value, perhaps, than anything you could have bought at the Hirst auction.
From Bauman Rare Books:

Until the mid-18th century electricity was little more than a parlor trick used to delight kings and amaze crowds. One such itinerant “electrician” aroused Benjamin Franklin’s curiosity, and he embarked on a series of experiments that would “snatch lightning from the sky,” opening up the new field of electrical science and ultimately making possible all of the electrical conveniences on which we depend today.

In his Experiments and Observations on Electricity Made at Philadelphia, Franklin offered the first clear evidence that lightning is an electrical phenomenon: “the greatest [discovery], perhaps, since the time of Isaac Newton” (Priestly). Included in this renowned work are accounts of Franklin’s famous kite and key experiment, his work with Leyden jars, lightning rods and charged clouds.

Always the practical experimenter rather than the abstract theoretician, Franklin coined a number of terms that we still use: positive and negative, charged, battery, neutral, condense, conductor.

It would be exhilarating to be in the same room as this volume. For somebody like myself, a self-taught fellow without a background in academic science and engineering, it seems like I could learn a few things. A modern, annotated version would be a nice piece of work. For example, consider the Leyden jar, previously unknown to me but completely fascinating and accessible science.

Experiments and Observations in Electricity at Bauman Rare Books
Leyden jar at wikipedia
Posted by Mister Jalopy at 9:04 AM
Email ThisBlogThis!Share to TwitterShare to FacebookShare to Pinterest
Newer Post Older Post Home