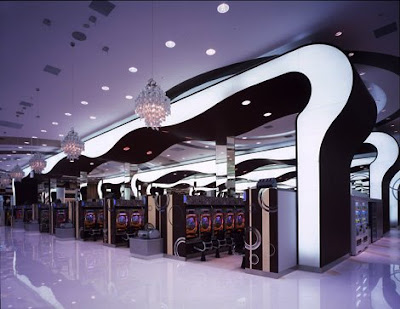 Years ago, I worked for a disk drive company owned by Fujitsu. I became friends with a Japanese engineer who shared many interesting stories about Japan. He told me that while he was in college he earned money by playing pachinko. Technically, it's illegal for pachinko parlors to award players with cash. They get around this by giving cheap prizes to winners. The winners take the prizes to little places around the corner that buy the prizes for cash. (Of course the places are owned by the same folks who own the pachinko parlors).

After my friend graduated he said he lost his ability to win at Pachinko. When I asked him why, he consulted a Japanese-English dictionary on his desk, and said he no longer had the "hungry spirit" needed to eke out a living at the game.

PingMag has an interview with Yasuhito Watanabe, the CEO of Tokyo Odyssey, a company that designs pachinko halls. The photos (exterior and interior) are stunning.

Earlier you told us this wonderful metaphor of a Pachinko being illuminated very brightly so that humans behave like bugs that are attracted to light. Once again, please.

Quantifying various factors like physical features from an ergonomic perspective has been incorporated in designs for desks, chairs and cars for a long time. However it’s even more important to analyse and apply human senses in designs. For example, you arrive at an upcountry station in the dark, so which direction would you choose to exit the station? On one side is a dark road without any street lamps, but on the other side you can see distant lights. People usually choose the road with lights. Same goes for the bugs being attracted to light and it shows that humans are also animals with natural instincts. It’s easy to take advantage of such animalistic human instincts and intentionally design lines that lead to products. Also, there are cases that crimes in a crime ridden area decreased after changing the colour of the street lamps to blue. Colours have a big influence on human activity and it can invigorate or heal people without them knowing. In this way, we consider the designing of human senses is extremely important and that’s what we call design shifts in minds as I mentioned earlier.